Almost two and a half years have passed since the great disaster in northeastern Japan. What follows is an account of my involvement in the stricken area. I made my first visit there as a volunteer in June, 2011, at the suggestion of 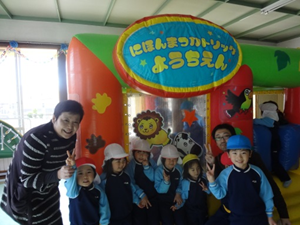 Fr. Kato, one of the parish priests of the Yamaguchi Church, who realized that I was straining at the bit to go and see for myself the actual situation there. I went alone to the Shiogama base camp of Caritas Japan in Miyagi Prefecture. There I was put to work removing debris and slime and seldom had a chance to talk to people living in the stricken area or to hear their stories. Working in the severe heat of over 30 degrees, I must have perspired two or three liters a day. I worked very hard and prayed equally hard for the suffering victims and their land, asking God to bring about that “new creation” that St. Paul speaks of. Working together with volunteers from all over the country was a learning lesson for me. The base camp leader, Ryuichi Kamachi was of especially great help. He told us, “I’m not in a position to tell you this, but putting all the strength you have into your work is much more important than preaching a hundred sermons. I greatly admire Mr. Kamachi’s skill in managing the volunteers’ activities. This was at a time when the self-defense forces, police, and firemen were still desperately looking for victims of the disaster who had not yet been attended to…

During the time I spent in the disaster area I was able to make a good assessment of the situation there. Before becoming a Jesuit I had worked in the field of temporary shelters. So I was deeply moved whenever I heard of houses being swept or blown away.  I realized what great efforts had gone into building those houses, and what a great debt had been incurred. (The owner might have had to spend the next thirty years returning the money he had had to borrow.) I felt as if all my efforts during my twelve years of building shelters had been in vain.
After my return to Yamaguchi after that first visit to Fukushima, what I had seen and heard there preyed on my mind. I wondered what I could do to be of help to the people of the disaster area. Recalling Mr. Kamachi’s plea that we work there with all our strength, I started to do physical exercises in order to become at least as strong as the men of the self-defense force. But I soon gave that up. Then an idea came into my head. The parish bazaar was approaching. How would it be if I collected beetles on the hill behind the church and the kindergarten and sold them at the bazaar? And so early the next morning I started collecting beetles. In four days I collected 100 beetles, which I was able to sell at the bazaar. Then the chairman of the parents’ association asked me where to send the money made at the bazaar. I realized that the parents would be greatly pleased if it went for the assistance of children. So I looked for a kindergarten in need of help in the disaster area, and came upon a Catholic kindergarten in Miyagi Prefecture that seemed just right to receive our donation. So we sent all the profits of our bazaar to the director of Nihonmatsu Kindergarten, Ms. Setsuko Sato. This was the start of our parish’s coming to the help of the people of the disaster area.

In November of that year (2011), I paid a visit to the Nihonmatsu Kindergarten. There I also met the chairman of its parents’ association, Mr. Mamoru Watanabe. He praised the members of our parents’ association in Yamaguchi for donating the profits of their bazaar, but he also indicated that in addition to money, they needed volunteers to help with the reconstruction of the area by hard work that would make them sweat. From what I had already observed, I too realized that housing was not the only problem. The land—nature itself—had suffered from the pollution of the nuclear plant. Moreover,
The people had differing ideas concerning the radiation problem, and were in conflict with regard to how the money being made available to them should be used.
Mr. Watanabe urged them to stop snarling at each other and to stop blaming anyone for the accident at the nuclear plant, but just accept it for the catastrophe it was. Withou entering into any of their arguments, we simply concentrated our energies on helping the kindergarten.
Mr. Watanabe is a bus conductor, and right after the nuclear accident his job was to shuffle evacuees from the town of Namie to Nihonmatsu. Thinking they would be returning soon, the evacuees got on the bus with nothing but the clothes they were wearing. Some babies died during the bus ride, and the police and self-defense soldiers who were escorting the group instructed the parents to leave them on the mountain, since they had been contaminated by the radiation. With great sadness the parents did as they were instructed. They were not consoled by the apology of the police or their assurance that they would later return and bury them.
The suffering of the people of Fukushima continued long after the nuclear accident. For example, the ugly head of discrimination began to rear its ugly head almost immediately. When, on our way back from work one day, we entered a restaurant in Iwate. We were immediately asked where we were from. When we answered “Fukushima,” we were shocked at the manager’s spontaneous reaction; he called for a spray gun. On another occasion our bus guide was told by some of the members of the tour, “Please do not make a stop in Fukushima.” I really felt like crying.
The milk produced by the cows of Fukushima are dyed red every day, so that it will not be sold in the market. The dairy farmers have lost their morale and are greatly shaken, especially since their livelihood and that of their families depended upon the sale of their dairy products. 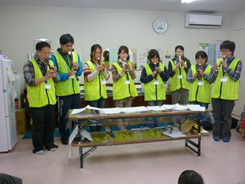 Mr. Watanabe makes a good point when he says that if nuclear plants are really safe, they should be built in densely populated areas, and not as they have been until now in the countryside, where the population continues to decrease and jobs are not to be had. He thinks that responsibility for nuclear accidents rests on the shoulders of those who promote nuclear energy.
I returned from Fukushima convinced that such government slogans as “new regulations will make nuclear plants safe” are no more than a cover-up for the real reason for promoting nuclear energy—to reduce the cost of electricity. In conversation with the parents of the children in our kindergarten in Yamaguchi, I found that many had found ways of saving on electricity, and also that they were eager to do what they could to help the suffering people of Fukushima. During a special Christmas campaign to gather money for this purpose, even children brought money to me, saying, “I do not need any Christmas presents. This is for Fukushima.” Some of them brought to me beetles that they had carefully raised, saying “These are for the children of Fukushima.” I was greatly moved by the children’s generosity. To the children that will soon be graduating from our kindergarten, I made three requests. The first request was that after they enter the adult world they would do what they could to discover new sources of energy. The second request was that they would help to speed up the complete abolition of nuclear plants. The third request was that each would consider becoming a medical doctor and devoting himself or herself to helping unfortunate people like those of Fukushima achieve both physical and mental health.

After returning from my second visit to Fukushima as a volunteer, I really felt that by myself I could accomplish very little. I told myself “No matter how often I go, nothing will change, but when enough people, especially the young, experience the damage of the disaster, the support will grow and much will be accomplished.”
But there is a great distance between Yamaguchi and Tohoku, and so there is the great problem of travel expenses. As I was mulling over this, I came across a book by Motoki Kato telling of a Waseda University experiment in volunteering in Tohoku that inspirited me. Starting in April, soon after the disaster, Waseda University sent 1300 student volunteers to Tohoku over a period of six months. The university staff helped both in the planning and in the implementation of the project.
This book inspired me to attempt something similar. During the long vacation time I began to put my plan into effect. Up to now I have led 71 people (in five different groups) from Yamaguchi to Tohoku. Our camp base is always Otsuchi, whose former leader, Fr. Marikazu Furuki, wisely advised me to prepare our activities before we come. Since in each group there is always one or more of our kindergarten teachers, we go prepared to work with little children. House wives who joined one group had the idea of making some dishes popular in Yamaguchi, such as blowfish soup and soba in the community center of the temporary buildings. Half of the cost of transportation of the participants in this program has been donated by generous members of our community. Each time I go, there is one person who gives me 100,000 yen, saying, “I can’t go, but take others in my place.” It is thanks to such sponsors that we have been able to continue our visits. Among the young people assisted by such donations there is a high school girl who, attracted by the disaster prevention programs has applied for admission into the Self Defense Academy. Also, a girl in fifth grade of primary school saved up her pocket money for a year and used it to pay for her own transportation. Many adults too have changed their attitudes. One told me that she had always taken her life in her family for granted. “I should have gone there much earlier, From now on I want to do everything I can, and I’ll also try to involve others.”
Experiences such as they have on this tour have an influence on all of their relationships: in the family, in the place of work, with friends. And without being aware of it, they are truly becoming a “new creation.” They are also learning to be compassionate. Much latent good will to be found in all the people we encounter each day, and volunteer activities in the stricken disaster region are a very good means of bringing this good will to the surface. And those who receive these services are almost certain sooner or later to discover here the hand of God here.
I’m sure that there is still much more that we in Yamaguchi can do to alleviate the suffering of our struggling brothers and sisters in Tohoku, who are going through such a painful experience.