THE CLOCK HAS STOPPED IN FUKUSHIMA

“Volunteers are limited to those over 40 years-old.” This notice was publicly displayed for a long period of time. This used to be one of the main requirements in the recruitment of volunteers to work in Fukushima. In other words, because of the danger of radioactive contamination, young people were not accepted. But if we consider the fact that there are tens of thousands of people from babies to the elderly, living in Fukushima, it somehow doesn’t seem reasonable to place such a limitation on young volunteers. 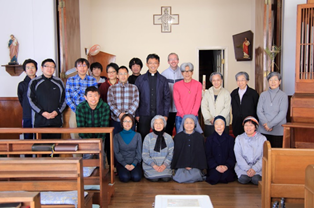 It may have been this consideration that motivated the authorities to replace the old notice with the following: “There is no ground to assert that low amounts of radiation have significant effect on one’s health, nor can it be guarantied that it will have no effect whatsoever. In short, there are no absolute standards here that can be applied to everyone. Volunteers should act responsibly, using their own judgment. Please note that the NGO “International Cooperation Center” will supply each volunteer with a list of dos and don’ts that will help him or her do this.
Thus, one has to make a personal decision to accept the risk involved and enter contaminated Fukushima. Last May our Jesuit pastoral team (JPACT) decided to take that risk and led a group of volunteers made up of young people from Jesuit schools and parishes on a tour of Fukushima.We reasoned that many young people following the various media’s reports of the great earthquake, tsunami, and nuclear plant accidents, desired to draw nearer to the suffering of the victims of this great catastrophe. No matter the risk, they wanted to observe for themselves how babies, children, young people, parents, and the elderly, were living in the radioactive polluted areas of Fukushima, and learn how they felt. So the aim of this report is to pass on to the reader the observations of both the young people and the organizers of the tour.

Let’s begin with a poem by Ms. Yamamoto Kikuyo, a member of our JPACT staff:

Except that there is no one to be seen in the rice fields A closer look reveals that many cars lie on the soil, deposited there by the tsunami Even some fishing boats remain there, where they were washed up on that fatal day

In a school six kilometers from nuclear plant 1 children once shouted and laughed But the ceiling of the school collapsed and fell down to the next floor The school’s only occupant now is the strong wind blowing in from the sea Where are the radioactive particles riding on the wind going to land?

Along the road leading to the nuclear plants A large number of policemen stand on guard Who are they watching out for? Who are they afraid of?

I had thought that ghost towns were only to be found on a vast continent Railroad stations abandoned, stores no longer doing business Signboards at the stations asking “Where is the town where people can live peacefully?”

In what direction is this country moving? Is there anything I can do? My heart full of impatience and anxiety I left Fukushima

Our group of volunteers proceeded to the Caritas Japan base in the town of Hara, where we were put to work cleaning up homes, and trimming and scrubbing trees near the socio-welfare center. Under the guidance of the Caritas staff we were able to look around a zone of the town of Namie about ten kilometers away from the nuclear plant.
According to the regulations for visiting this area, visitors were to be allowed to enter only during the noon hour. Going through the destroyed area, I think we all felt the sentiments Ms. Yamamoto expresses in her poem above. We all felt that it was as if time had stopped in Fukushima on March 11, 2011.

Now I would like to present some of the impressions reported by Kenta Sugino, a student of medicine and the youngest participant in our tour:

”The reason I decided to take part in this tour was the desire to observe for myself the actual situation in Fukushima. Last year I went to Kamaishi in Iwate Prefecture for three weeks, and last March to Minami Sanriku and Kesennuma, but this is my first time to Fukushima.
Because of the high radiation level in Fukushima reconstruction is still impossible. The place remains exactly as it was when the tsunami hit it. The sight was so terrible that it overwhelmed me. Although reconstruction is taking 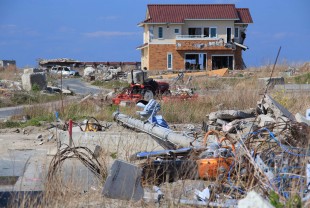 place in Iwate and Miyagi Prefectures, why, I asked myself, why does this region still remain in such a state? Now I was able to grasp the real Fukushima.
The number of volunteers coming here has recently decreased. I think that many people refrain from coming here because of their fear of radiation. But while just one X-ray picture contains 6.9mSv of radioactive particles, at Iidate village, which is thought to emit a high amount of radioactive particles, the figure is 0.55uSv/h or 2uSv per day. Thus, the radiation intake of one day of volunteer work is 1/600 of one X-ray picture radiation exposure. Opinions among scholars with regard to bodily damage from radiation differ, so that it is hard to understand the matter.
From another point of view, there are many former inhabitants of Fukushima who now have to  do with cramped temporary shelters. Having observed their suffering I wish I could be of some little help. I pray that many people all over Japan share this enthusiasm and join together to help. I believe that one of the tasks of volunteers is to help to build up hope and a will to live in those who are suffering from the death of their loved ones. There are many kinds of volunteers. Working as an individual, very little can be done. Even working in small groups action is slow. But if hundreds and thousands of volunteers were to work together over a long span of time, Fukushima would surely come to show signs of reconstruction.
Many people visit Fukushima without knowing the real facts, as I did. I think that young people like me are needed there, and so I hope that many will come to know the real situation in Fukushima and desire to offer themselves with good will and zeal as volunteers in the reconstruction of Fukushima. I think that even tourist and/or shopping tours to Fukushima can be of help. I’ll be happy if my reflections provoke those who read this to think of Fukushima a little.”

The reflections of young Kenta Sugino reveal his deep dedication to his medical profession. It gave me great joy to hear such profound observations from our youngest participant.The observations that follow are those of Mr. Yoshimura, a primary school teacher and a parishioner of Rokko Catholic Church in Kobe.

“One day I suddenly realized that I had totally forgotten Fukushima. Of course I knew something about it from news broadcasts. But I must confess that I had little interest in the lives of the people living there, and was indifferent to their opinions. The town I live in remains as calm as it was before the earthquake, and my life style remains the same as without change. It was as if I had completely forgotten about the disaster in Fukushima.
Then one day—I don’t know why– Fukushima came back to mind. I realized that the situation of Fukushima is different from that of other places in the Tohoku region. I asked myself, “How do the people make a living?” They can’t do so just by clearing away the debris from the earthquake and the tsunami. The invisible radiating dust still remains. Fewer volunteers are going there to work, and there are all kinds of rumors about the damage to health caused by the radiation. But what could I do?
One thing I could do I realized was to tell others about the situation. I am now the home-room teacher of the sixth grade of Nigawa Primary School, and after golden week I told the children about my change of thought with regard to Fukushima and also wrote about it in the school paper.
I also had the opportunity to talk to the children’s parents, after which one of them came to me and said, “I also realize that I have forgotten Fukushima. I want to give some help.” Another parent took the trouble to call me by phone and said, “I’ve decided to visit Fukushima with my husband. There’s nothing much I can do, but I thought that doing some shopping there will somehow be a way to help the people there.” I was very happy to hear that”

I was impressed by the positive attitude of Mr. Yoshimura, who had tried to work in solidarity with the residents of Fukushima by sharing his experiences and observations with others. Next I would like to present the impressions of Nobuhito Kubo, a young leader of educational activities for children at Rokko Church. 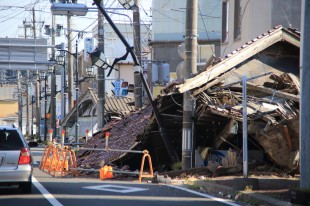 “Before starting our volunteer activities, the president of the social welfare organization greeted us warmly, saying, ”This area has long been famous for its culture, but all that changed from the day of the disaster. Thanks to you volunteers, little by little progress is being made. I want to see this town revitalized again. All of you are here to save this Kodaka region.”The work started from the houses that had asked for help, and we cleaned them and their gardens as well. The first day we worked only in the morning, and when we had finished there, we went to the town of Namie and the ocean shore the Fukushima nuclear plant. Since the zone was officially “off limits,” we had to go through an imposing array of police guards. When we entered a primary school near the Fukushima nuclear plant, on the blackboard of a classroom that had been totally destroyed we saw a message left by children who had graduated from this school. The message read, “Surely rising again.” This made me feel strongly that everybody—the graduates of this primary school, the residents of the village who had had to evacuate it after the disaster, but were now ready to return home again, as well as the staff of the social welfare organization who were taking care of us all had a great love for the town.”

Looking at the writing on the blackboard, I could not help saying a prayer for the children.
When one gets involved with the issues regarding Fukushima, one is compelled to take a stand and choose one out of several possible options.
Option 1: Fukushima is a radioactive contaminated place, unfit for human life. If one takes this view, true assistance to Fukushima consists of promoting the evacuation of the residents and demanding government help to implement this. For Fukushima then, reconstruction will take place more than 100 years from now.
Option 2: The radioactive contamination resulting from the nuclear plant accident is not of a level to significantly affect the health of the residents. If one takes this option, then the inhabitants must be encouraged to return home and the reconstruction of the region positively promoted,
Option 3: It’s difficult to assess the effects of the radiation, but, since people are in fact living in Fukushima, another option is to join them. Visit them, keep in contact with them, accompany them in their joys and sorrows…and together with them grope for a solution.

I myself am now considering which option I should choose. What about you, who are reading this article? If this article is of any help to you in deciding, I shall be very happy.