From the Catholic World(171)

Iranian Christian prisoner denied urgent surgery
(May 8, Mohabat News) Vahid Hakkani, who has been detained in Shiraz since last year, has been told by prison doctors that he urgently needs surgery [suffering from internal bleeding of his digestive system], but officials have failed to arrange his transfer to a hospital. In February 2012, he was arrested at a house church gathering along with a number of other Christians who were in attendance. They were accused of having contact with foreign Christian organisations, propagating against the regime and disturbing national security. 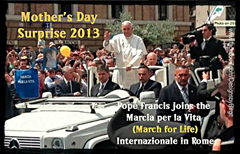 in Rome on 12 May to participate in the March for Life, including some notable figures from the United States pro-life movement. During his address, Pope Francis encouraged them to be attentive to the Europe-wide petition to end abortion, called the “One of Us” initiative.

Burma: CSW report details severe human rights abuse
(May 13, csw.org.uk) Christian Solidarity Worldwide (CSW) released a new report on human rights in Myanmar. The report welcomes signs of political change in the country, including “significantly increased freedom” for media, civil society and political actors, and improvements in freedom of expression in some areas, but warns against “premature euphoria” and highlights many grave challenges particularly in respect to the protection of human rights, including freedom of belief.

New project against trafficking and child labor in India Melbourne
(May 20, Agenzia Fides) – Every day, many children are abducted against their will, or sold by their families to be exploited in domestic work and prostitution. Many are also forced to beg on the streets just to survive. Some are forced into selling their organs on the black market.   The Catholic Mission Australia promotes the 2013 campaign of the Propagation of the Faith under the theme ‘Do not be afraid … I will save you.’ In the coming months the Catholic Mission will deal with the missionary response to the desperate reality of child trafficking and child labor in India and around the world, in all the parishes of Australia. All donations collected will be used to finance the activities of the Catholic Mission with communities in more than 160 countries around the world, providing support to entire parishes in their pastoral work.

Christians will bring aid to Syrian refugees during a journey of solidarity Ernakulam
(May 22, Agenzia Fides) – The Indian Christians mobilize for their confreres in Syria where more than 90,000 victims and refugees are continuing to increase since the beginning of the civil war. Due to this alarming situation, the Jacobite Church in Kerala, linked to the Syriac Orthodox Patriarchate of Antioch, has launched a collection of humanitarian aid for the assistance to the Christian communities in Syria.

The Pope prays for Catholics in China on the feast of Our Lady of Sheshan Vatican City
(May 23, Agenzia Fides) – Pope Francis invites the faithful around the world to pray for the Catholics in China celebrating the liturgical memorial of the Blessed Virgin Mary, who is venerated at the Shrine of Sheshan in Shanghai. At the end of the general audience on May 22, he said: “I invite all Catholics around the world to join in prayer with our brothers and sisters in China; to implore of God the grace to proclaim Christ, dead and risen, with humility and joy.”

Pope calls for regulation of free market
(May 25, The Tablet) Pope Francis has fiercely criticised the “cult of money” and the “tyranny” of unbridled capitalism in what aides described as his first major address on the global financial and economic crisis. He said on 16 May in a speech to welcome four new ambassadors to the Holy See – from Kyrgyzstan, Antigua and Barbuda, 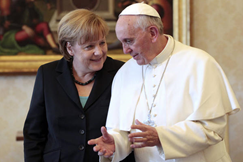 Luxembourg and Botswana, “This imbalance results from ideologies that uphold the absolute autonomy of markets and financial speculation, and thus deny the right of control to states, which are themselves charged with providing for the common good.” He also affirmed that the “ultimate origin” of the global financial crisis was the lack of “person-centered ethics in the world of finance and economics”. The head of Europe’s most powerful economy, German Chancellor Angela Merkel, appeared to back the Pope’s broad analysis. “Crises have blown up because the rules of the social market have not been observed,” she told reporters on Saturday after a 50-minute meeting with Pope Francis at the Vatican. “Pope Francis made it clear that we need a strong, fair Europe, and I found the message very encouraging.”