Jesuit Manuel Hernandez has been for 50 years working as a volunteer chaplain at jails and Reform medical centers for young inmates to assist in their rehabilitation from drugs and alcohol addiction. Chaplains play the admonitory role of teachers of the inmates so that they repent from their mistakes. Br. Hernandez works as a chaplain in one of the 4 national medical reform centers. The inmates interned there are from 12 year old to 26 year old.

He says that, first of all, he communicates them the following messages.

1-      There is nothing in this world without reason
“The reason for you to be interned in the Reformatory is not to punish you, but to train you so that you could have opportunities to reflect on your future”.

2-      Nobody is bad in this world
“You were not interned here because you are a bad person. You and the other inmates are protected here to prevent your lives from disease and drugs. In other words, here you will have the opportunity to find yourself”.

3-      Do your best and wait for your fate
This is a Japanese proverb and Brother Hernandez gives it a particular meaning.
“From now on think of your family and of all those for whom you are considered important. Show gratitude to them. Wait with patience till social trust in you is recovered”.

But what is the meaning of “finding oneself”? Br. Hernandez explained the need of “taking notice” to be able to recover from drug addiction.
“Unless a person discovers the worms around it will be impossible to neglect them”. The meaning of worms is drugs. In other words, unless a person realizes that s/he is living surrounded by dangerous drugs, there would be no way to suppress them. The reason is because not until the danger is noticed does one leaves it. To find oneself will be, first of all, to notice that one is in a dangerous situation. Nevertheless concerning the future, the answer to the most pressing human and personal issue people are usually concerned for, is, what is really happiness?
With regard to danger, Br. Hernandez 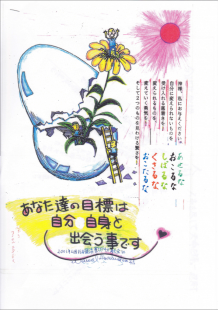 explained that presenting the example of the chick he is able to stress how important is to look at the future, being aware of the actual situation. There is a time when the chick inside the husk notices (feels the danger) that in case it remains longer inside will become suffocated.
Consequently breaks the husk seeking a future life. Something similar can be said about the young people interned in Reform medical centers, Br. Hernandez stresses. “You should notice that you are in danger inside the husk (with drug addiction) and must come out to face your future. But, if you remain inside the husk and do not face the future, the only option left to you will be a mental hospital, a jail and the cemetery”.
It is a sad reality that many young people leave the reformatory to return again because of second crimes. Why that? One of the reasons could be because we all look for pleasure. Therefore, Br. Hernandez says that “wisdom” is needed.
“Wisdom” means the power to discern by using rightly one’s reason. When a person uses just his instinct will not commit the same mistakes again. It is said that monkeys fall from trees, but they will never try to hold on the same branch from which they dropped down. On the contrary, humans make decisions using their heads. Since people are looking for pleasure, no matter they are aware that the object is dangerous, make sometimes the same decisions. This means they use wrongly their heads. According to Br. Hernandez using the head looking for pleasure is to be patient just for a day. That is the reason why once they leave the reform center they start using drugs again. On one hand, to use rightly the head is the attitude to “Do your best and wait for your fate” and that requires patience; but if this is accomplished those persons will eventually receive trust from society. Thus they can face a new future.
Br. Hernandez points out one more issue: What makes young people start using drugs?
The experience of family discord is one of the main causes, according to him. Most probably, the lack of parental affection, the impossibility to live at home and their loneliness for not being able to fill their thirst for love has made them to go after drugs.
But as he recognizes, the most difficult is to make them forget the familiar environment surrounding them during their childhood growth. The past is gone, face now the future.
Although he is a chaplain he never talks about religion out of his own. In case he did it the young inmates will stop trusting him. Such chaplain asserts blankly “See, I pulled out all talks about God”.
I could not stop realizing his deep faith in God listening to his words. Br. Hernandez deals with the young inmates convinced that they are his neighbors.
(Interviewer: Yamamoto Keisuke Tokyo Jesuit social center)