Book Review : A Man Who Was on the Brink of Death: Yoshida Masao and the 500 Days at Fukushima No.1 Plant by Kadota Ryusho / PHP Publications / November 2012 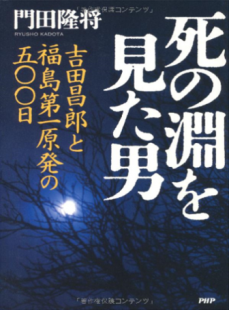 This book aims at tracing the details of what has been the biggest nuclear accident of the century, the meltdown crisis at the Fukushima No. 1 Plant. The author focuses on the work done by the technical staff of the plant to try to cope with the critical situation. It asks “What had happened at the moment?” “What were the technicians thinking about?” “How did they carry on their desperate fight?” The extreme situation at the time of the nuclear explosion, narrated like a Hollywood movie, overwhelms the reader with its powerful impact.
At a time when the dangers regarding nuclear plants tend to be discussed exclusively from physical, political and economic dimensions, this book tries earnestly to grasp the realities surrounding the technicians who were operating the Fukushima plant. It was a human drama of people facing death.
Many people experience once-in-a-life dramas. Nevertheless, the critical situation at Fukushima highlighted such human drama to an extremity. The high literary capability of the author, together with his accurate coverage, brilliantly succeeds in delineating this human drama.
This book is certainly a major testimony to the nuclear accident. It is written within the Japanese political, economic, and social context, but without stopping there. It can be considered a rare written record that probes the personalities of those men who were on the brink of death as they battled the crisis. We can observe, strangely enough, past comments of the author with regard to the inclinations of modern Japanese—that they are “a generation that thinks only about themselves.” But this time, on the contrary, the men operating the nuclear plant and facing death stuck together as a solid team with a common mission. Despite the fact that they were on the brink of death, in fact precisely because they were facing death, they didn’t withdraw but kept thinking of others.
As a result of that nuclear accident, the fragility of Japan’s nuclear policies has been openly exposed. This book also plays an important role in manifesting the strong inner belief that remains inside the hearts of Japanese people, namely, to take responsibility even at times of harsh realities.
Reading this book leaves a fresh feeling with regard to the integrity of the persons portrayed, in spite of the harsh reports of the nuclear plant’s accident.
(Yamamoto Keisuke, Tokyo Jesuit Social Center)