Symposium on the Second Anniversary of the Great East Japan Earthquake of March 11, 2011

The Symposium on ecology and nuclear energy held by the Tokyo Jesuit Social Center at St. Joseph’s Hall of St. Ignatius Church in Tokyo on March 9 attracted 140 people. The Symposium was part of various other prayer events to commemorate the disasters that occurred at the time of the big East Japan tremor two years ago.
Last year on June 30, 2012, the Jesuit Social Center published a book on ecology and the Fukushima nuclear accident, This book focuses on the Society of Jesus’ recent official stand on ecological issues as published in the document Healing a Broken World. The book also contains other Christian and Catholic statements concerning nuclear energy, such as the appeal by Japan’s Catholic Bishops’ Conference: “Abolish Nuclear Energy Immediately!”
The Jesuit Social Center decided to continue elaborating the messages offered in last year’s book by organizing the said Symposium. The aim was to offer a public platform for the voice of people affected by the natural disaster, as well as to reflect on other possible technical options 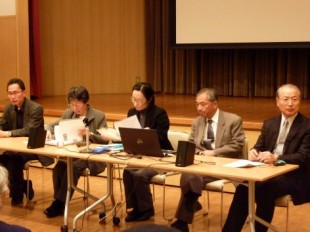 to replace Japan’s present dependence on almighty nuclear energy. We also felt the need to recall the public statement of the Japanese Bishops concerning nuclear plants and the official stand taken by the Japanese Province of the Society of Jesus.
The Symposium was well received and the Social Center will conduct a year’s seminar course on ecological issues focusing on the book Healing a Broken World.
(Ando Isamu, SJ, Tokyo Jesuit Social Center )