The hard Realities of Thailand

1. Scholarships for Rural Girls at Risk: Who and Why
The Northeast bordering Cambodia and Laos is the poorest and largest region of Thailand. There are many remains of dinosaurs, ancient pottery, rich folklore there…and little progress. From this area and from the North a great number of girls have come to the cities and the sex industry. The causes are mostly poverty, dysfunctional families, deprivation, indebtedness, etc. As tertiary services like hotels and tourist spots developed in the central region, the demand for cheap labor from the peasantry also increased and many small farmers lost their lands. Education was the last to come to this zone. After the end of the Vietnam War there was a tourist boom from the West as well as from Japan, Korea, China, etc., and with it, the HIV virus and AIDS. I helped to produce a video called The cry of My Appeal to explain why and how in a normal Asian country it could happen that so many thousands of girls are being pushed into the sex trade and blatant abuses.
As soon as I finished my work with the Jesuit Refugee Service of Thailand, I decided to put into action what I had proposed in the video, namely, to help prevent the sexual abuse of girls at risk by providing them with scholarships, in order to keep them in their villages and schools. The financial help is US $200 a year; and if, after finishing high school, they manage to enter the university, we help them until they obtain a loan from the State. Some are already teachers, nurses, air hostesses, etc. Others are dressmakers. Warali Mini School for dressmakers, supported by JESS, was initiated with financial assistance from Ms Horiuchi Hiroko and friends from Sophia University, Tokyo.
When we started this work, the first donation received was from the Jesuit Social Center Director at the time, Fr Ando Isamu, for which we are most grateful.Doctor Nishikawa Yoshiki (Himeji) also assisted us with exchange visits between schools in Himeji and Taphraya districts. He and many other medical doctors of the Himeji area made great friends with many rural doctors of Thailand. Dr Nishikawa wrote a book, Forgiveness,about the attitude of Thai women affected by the HIV virus with regard to their husbands. This book received an award in Himeji. Dr Nishikawa has passed away, but we remember him well, his family and friends. Respecting his request, some of his ashes were thrown into a Thai river and ocean waters.
We have been providing scholarships for almost twenty years. The receivers are mainly Buddhists, Tribal children and a few Christians and Muslims from the South. At present, Thai society suffers from serious political and social-ethical problems and, as always, the weak ones suffer the most! HIV infections, as well as abortions, are more frequent among the younger generation.
Our beneficiaries are from 55 provinces out of the 76 provinces of Thailand.

2. Muslims in the South of Thailand. Why the unrest.
Endo Shusaku’s novel about the life of the Samurai YAMADA in Thailand is situated in the period of Ayuthaya, the old Siam, when Muslims were already stationed in South Siam (Patani) with their own sultan. Ordinarily, they agreed to pay tribute and taxes to the King of Ayuthaya in order to get his protection. But also in Ayuthaya there were embassies from Persia and other countries, like Japan, China, Portugal, France, etc. Muslims, Christians, Hindus and Buddhists have lived peacefully, concerned mostly with commerce. Some Chinese Muslims also settled in Siam. Therefore, the Muslims from China, Persia and India have been scattered in small pockets all over Thailand. They adapted for themselves the way of living of the local populations, mutually respecting each other till this day. There are mosques in several cities of Thailand, as well as in Bangkok once it became the capital of the Kingdom of Thailand, where the King became the protector of all religions. 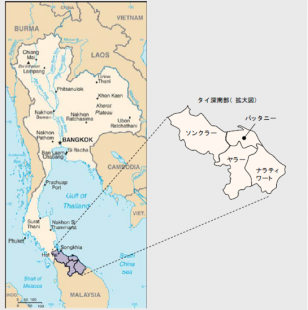 The Muslims of the South entered Siam from Indonesia, Makasar, and Malayu Malacca. Therefore, ethnically and linguistically, they are different from the other Muslims of the country and live in the Old Patani Kingdom, the three further southern provinces of Thailand: Patani, Naratiwat, and Yala. They were able to live by themselves, semi-independently, protected by Thailand from the attack of other chieftains and warlords who would have liked to extend their territory. Although Siam lost some territory to the European powers that had colonized Laos, Cambodia, Burma, and Malaysia, yet the southern part remained Islamic within Thailand. Presently, about eight million Muslims live there, together with some Buddhists. Most of them live simply, cultivating rubber plantations, or fishing. They had been left to themselves.
But since about forty years ago the central government of Bangkok started to punish government officials with political problems or justice irregularities, sending them to the South; and some of them developed their sinister influence there. On the other hand, this border zone was manipulated sometimes by Malaysia, at other times by Thailand’s government because of their support to communist influence or to separatism, or simply because of illegal trade, depending on different situations. When Thaksin Chinawat became Prime Minister he thought that the time was ripe for his political party to gain popularity and take it away from the Democrat Party which had traditionally been preferred. He immediately changed many administrative policies, and, himself being a policeman, gave much power to the police. In one incident, soldiers and the police killed 85 Muslims in Tak Bai. In another they killed some Muslim worshipers inside the Cruse Mosque. Again in another, the most famous Muslim lawyer was abducted and killed and his body disappeared. Justice to those incidents has never been done to this day.
Since then, acts of violence, killings and bombs have become a daily affair. Buddhists and Muslims are killed—teachers, monks, soldiers, officials, and ordinary people. No matter how much money is poured out to solve the problem by way of guns, drugs, surveillance systems, etc. nothing works. The truth is that this situation is not so much a religious issue but the result of a political problem. Nevertheless, the people of Bangkok and the government do not care, or worse still, try to manipulate it for political gain. It is true that there have always been three or four groups of so called bandits, separatists or terrorists, like PULO, BRN, etc. even with representatives in Sweden, but with hardly any weight or international standing.
The last move of Thaksin, who was condemned by the Supreme Court to four years imprisonment but is still on the run, was to gain support from the U.S.A., Europe, Japan, and others by acting as a broker between them and Malaysia and Cambodia, to get access to the abundant oil, petrol, and natural gas in the Gulf of Siam. He also wants to get the cooperation of the Muslims of Malaysia and Patani. The present Prime Minister, Yingluck, sister of Thaksin, does whatever Thaksin asks her to do. Who supplies war weapons to those like terrorists? At one time Libya, or Saudi Arabia—it is normal for Muslims to help brothers in need—provided the arms, but in most cases they get them, easily enough, in Thailand itself. One should remember that the smuggling of weapons in Thailand is the prerogative of men in uniform.
Once my friend Dr Nishikawa came to Thailand and donated a marvelous ambulance to a hospital in the south. I accompanied him to a dinner with two famous Thai doctors from the south and informed them of our desire to visit one of them at his hospital in Yala. But we were told: “For your own safety you’d better not come. Even I myself, a Muslim who very often attend to wounded terrorists and others, am not safe. No one is safe.”