I am a Vietnamese scholastic sent to Japan as a missionary in 2009. Since August of last year, I have been working at the Tokyo Jesuit Social Center, located in a very central area of Tokyo. The purpose of working here before starting my study of theology is to be in touch with Japanese society, which is difficult to do when focusing on study.
I had hoped to see not only Tokyo but also other regions of Japan, so this is a good opportunity for me to come to a deeper understanding of the Japanese situation. The Society of Jesus in Japan has 3 social centers—in Tokyo, Osaka, and Shimonoseki. Last October I had an opportunity to visit our Osaka Center. Fr. Shin Takayama, a Vietnamese-Japanese Jesuit, works there.
The Osaka Center is located in Kamagasaki, an area of town where day workers congregate. Since 1950s a huge number of people gathered here looking for work. (Many articles about Kamagasaki can be found in previous Bulletins, such as numbers 123, 94, and 87). Thousands of people gathered every day and went to work for companies offering jobs for an agreed amount of pay. However, when the bubble economy burst, jobs were no longer available and many workers became homeless.
On arriving in Kamagasaki, the first thing I saw was a big building housing many homeless people. I arrived at 8 a.m.—the time when many had already left for work. However, there were still some cars parked around the building and I was told that these belonged to companies wanting to hire people that day. Every car had a small paper 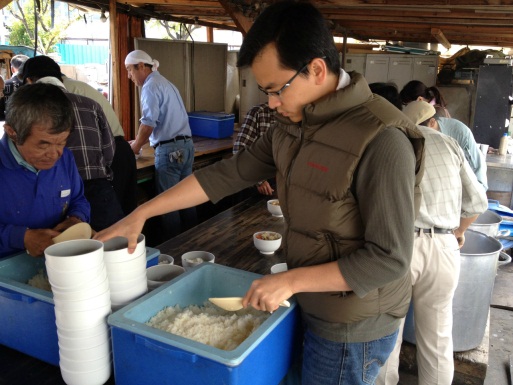 attached with information about the kind of job and the number of people they wanted and, of course, the amount to be paid for a day’s work. Whoever agreed to these conditions could get into the car and wait until enough people had gathered to go and begin the work. This way of hiring workers is a handy way for companies to avoid the burden of responsibilities they would incur if they hired people full time. However, just a few numbers of daily workers here can have job every day. The majority of them have to live by collecting garbage to find some recycle materials which they can sell and get a little money for their living.
I went to a nearby park to help volunteers prepare food for the homeless. Many homeless people had gathered there waiting to receive food. That day we provided food for almost 600 people. What I saw that day still remains vividly in my mind. Though I had been in Japan almost 3 years, it was my first time to see such a big number of homeless people. The atmosphere of Kamagasaki is so different from the prosperous atmosphere of Tokyo.
I stayed in Kamagasaki just 3 days and often saw elderly people sitting alone in dark places or in front of office buildings. At night, many people were sleeping outdoors in spite of the strong heat during summer or the extreme cold during winter. I was told that the number of homeless people here decreases year by year especially during heavy winter. The Jesuit Center and many other religious groups try to supply necessities for those who are in need. Fr. Takayama is cooperating with many other groups to provide the homeless with food and other services, like giving haircuts, or accompanying them to courts or hospitals as needed. The Center is also a place where high school and university students can help as volunteers and observe at first hand the life of day workers and homeless people. I left Kamagasaki with this question at heart—besides feeding homeless people, can’t we do something more for them so that they can live happily and with human dignity?