[ BOOK REVIEW ] ” JUSTICE: What’s the Right Thing to Do?” By Michael J. Sandel by Nakagawa Keiichi 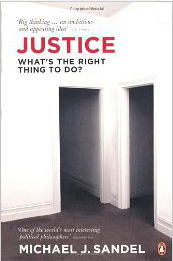 NHK’s education channel broadcast on Sunday evenings, from April to June, a series of one-hour TV programs under the title, “Justice with Michael Sandel of Harvard University.” Twenty-four lectures of Professor Michael Sandel were edited into 30-minute programs and were aired twelve times. Despite the seriousness of the programs, which introduced the political and economic thinking of well-known philosophers like Aristotle, Kant, Bentham, Mill, Locke, Hume, Rousseau, Hayek, Friedman, Rawls and others, the reactions immediately provoked were beyond all expectations. The programs were soon broadcast again and, edited on DVDs, will go on sale at the end of the year. Professor Sandel visited Japan in August and delivered public lectures at Tokyo University.
I, too, studied philosophy while I was a university student, so I followed the NHK TV programs with great interest. To tell the truth, I never imagined that programs on philosophy could attain such popularity in Japan. The Japanese people are by no means considered great thinkers. Nevertheless, Professor Sandel’s lectures have been so popular in his own country that Harvard University allowed American TV to air them. This is the first time that has happened at Harvard University. Again, Professor Sandel became a member of the Presidential Commission for the Study of Bioethical Issues. This book is based on the above lectures on Justice at Harvard. Thus, watching first the TV programs and then reading the book is a double joy.
As mentioned above, the subject selected by Professor Sandel is totally orthodox. He presents political thinking and its historical current in the following way: 1- Utilitarianism (looking for a maximum happiness for the majority) 2- Supreme Liberalism (Libertarianism, making individual autonomy and free contract the supreme theory) 3- Quest for virtues (Aristotelian philosophy that makes morality the norm for all existence).
Then, after treating in order all three of these themes, he introduces a new variation: 4- the thought of Kant on freedom, obligation and right based on human dignity as an existence with reason and 5- the political thought of Rawls stressing the gaps in today’s society that impede individual autonomy and free contract. Especially after Friedman, when the United States was dominated by liberalism and free trade, the thinking on Justice of John Rawls, also a Harvard professor, which was thought to be a return to public philosophy, was translated into Japanese (1979) while I was a university student and I still happily remember seminars conducted on Rawls’ writings.
There are two main reasons why such orthodox philosophy seminars have been so popular. One is that the lectures are concretely adapted to daily life. For instance: Are conscription and the military volunteer system morally just? Is commercial use of sperm and ova justified? Can we admit same-sex marriages? Are Affirmative Action or priority policies for small racial groups reverse discrimination? Are the trade parleys between Ichiro and financial companies offering enormous salaries morally justifiable? Is it just for universities to win new students through fund raising? In this way, by taking up concrete issues, philosophy is presented not as mere speculation but as a source of living wisdom for real life.
The second reason is that, by studying concrete examples, students become fully involved in their discussions. Professor Sandel is a real adept in the art of narration. He gets students to express their opinions, one after another, with no blank refusals. Moreover, he is able to draw them unnoticed into the historical thinking of past philosophers.
Sandel truly deserves his reputation of having revived the method of Socratic dialogue today. Even in Japan, Professor Sandel’s teaching methods have had a large impact. Dialogue might not produce consensus for everyone, but it is a new dynamic step toward producing change in society for the better.
Another important point of view of Professor Sandel is “Communitarianism.” This means that humans foster their identity within communities and assume communal responsibilities there. I have the feeling that communitarianism fits me personally, so I greatly enjoyed reading this book.