A Jesuit Initiative in East Asia
In recognition of the need to examine the social context of the Jesuit mission in Asia- Pacific today, a Social Mapping Project was initiated by the Jesuit Conference of Asia- Pacific (JCAP) in early 2009. Around the same time, JCAP participants at the Jesuit international social justice workshop in Madrid in November 2008 asked for a more comprehensive conference-wide database of Jesuits in the social field.
The JCAP office worked with a team of lay collaborators. With the concurrence of JCAP Major Superiors in January 2009, the social mapping project was launched. It has the following objectives:

The present realities of Asia-Pacific require more coherent strategies and well-combined efforts across provinces and apostolic boundaries. The increasing numbers of vulnerable migrants, fast-paced and inequitable economic development, threats to marginalized groups, deep-seated conflicts and ecological injustices are among the pressing concerns in the region inviting a greater role for Jesuits and their collaborators.
This study recommends that the Society should identify common apostolic frontiers or priorities to tackle at the Conference level through a multi-sectorial approach. Migration, Environment and Governance of natural resources can be among the priority apostolic frontiers relevant to all countries of Asia-Pacific. Jesuits and companions are engaged in these fields in many parts of the region. Specific goals can be identified for each of these two areas and strategies that involve all the relevant apostolates – intellectual, social, pastoral, education – can be formulated, implemented and monitored at the (JCAP) Conference level.
The social mapping project has revealed that only a small number of Jesuits are engaged in full-time social ministries and these often experience a sense of isolation and lack of support. It has also been highlighted that direct contact of Jesuits with the poor is decreasing. In fact, Jesuits’ lack of commitment to being with the poor and to social justice is a recurrent observation. Moreover, while there are a number of expert individuals and institutions in the Assistancy, current efforts seem to be piecemeal. There is a lack of connection between different apostolates, especially between the social and intellectual ministries. As a result, the sharing of expertise and the implementation of joint projects has been minimal.
Planning can be greatly improved. In particular, the Conference, Provinces and Regions would do well to plan in terms of mission frontiers and not in terms of apostolates.
Finally, a number of younger Jesuits have inherited existing ministries pioneered by their predecessors. However, local and regional contexts have changed. The younger generation of Jesuits will respond to encouragement and flexibility. They are called to boldly re-define the road ahead.
In summary, GC 35 urges Jesuits to build bridges across barriers so as to promote reconciliation with God, with others and with creation. Located in Asia-Pacific, a region culturally and religiously diverse, economically dynamic and politically wide-ranging, JCAP has to respond to this call for reconciliation with boldness and creativity.

Process
The JCAP office identified and contacted Jesuits and collaborators in each Province and Region who were involved in social-related initiatives. Through email surveys, information was sought from these persons regarding their current work, their way of working, their network of contacts, future plans and how they might benefit from greater international co-operation. A total of 103 persons working in the Assistancy were contacted, comprising Jesuits and lay persons engaged in social ministries; Jesuits involved in social initiatives with other organizations and their collaborators; and Jesuits active in social-related concerns through the intellectual, pastoral, education and other ministries.
A total of 74 persons responded to the survey. Thereafter, interviews were conducted with 17 selected individuals to gain greater insight into the social needs they are addressing and the possibilities for greater collaboration at the Assistancy level. With the information gathered, an analysis was conducted to identify common strengths and challenges in the social ministries. Findings and recommendations are presented in the report.
The most basic question that the social mapping project sought to answer was: In what areas are we now actively engaged? An initial survey revealed that Jesuits and collaborators in Asia-Pacific have been active in the following social-related themes: 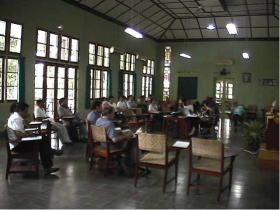 A Social Apostolate Meeting was held in Klaten (Indonesia) under the sponsorship of JCAP from 16 to 20 August 2010 to discuss the issue of migration in East Asia and the Pacific. Nearly 40 delegates, Jesuits and their co-partners, from the countries of the region participated. The participants discussed the mapping report and identified the following key areas that need greater attention.

Migration (Please refer to the article “Migrants in Japan”in No. 154 of this Bulletin.)

*Goals
Participants reflected on migration in Asia-Pacific and agreed on the following goals for the Conference project:

*Migrant groups
It was also agreed that the project would focus on the following groups of migrants:

*Areas of action
The following key areas of action for the first 3 years were agreed upon. Detailed action plans were formulated for each area.

It was agreed that a task force should be formed to get the migration project moving and that a full-time person should be engaged for a new Conference migration desk. Fr Bernard Arputhasamy SJ agreed to head the task force.

Province Action Plans
Each Jesuit Province represented explained the action plans to be taken. I offer here the program of the Japanese delegates. 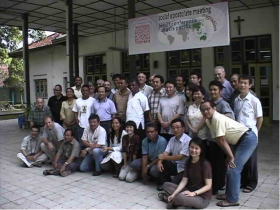