FROM THE KEIHIN REGION [Final] GERMANY: An Evangelization Secretariat 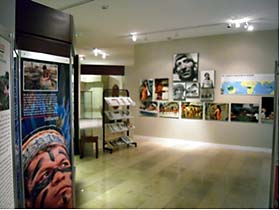 n relation with my work as a member of the Franciscans’ Foreign Missions Committee, I paid a visit to the mission bureau the Franciscans operate in Germany. Germany sends more missionaries abroad than other Christian European countries. The Evangelization Secretariat of the German Franciscan Province, located in Dortmund, is actively involved not only with foreign countries but also with non-Christians living in Germany.
In Warl there is an old Mission Museum, a treasury of past records of evangelization, where one can see ample historical data concerning long efforts of evangelization. There are special sections dedicated to Asia, Africa, and Latin America, with easily understandable explanations of the regional characteristics and the documents exhibited. Recently the museum has been renewed as a national museum and has been transferred from the Franciscans to official jurisdiction as a foundation. Although the administration of the museum is no longer Franciscan, the Director and staff are members of the Franciscan Order. The place is well known locally and schools send students there for extracurricular work.
The Secretariat publishes a magazine four times a year and organizes many exhibitions and campaigns. During the year it also offers its facilities for holding programs of pastoral experience for lay and religious people and organizes funding campaigns for projects.
Besides financial support for programs abroad, there are also evangelization programs for atheists. This is due mainly to the situation of active atheists from the East residing in Germany. There are passive atheists in Germany, like those refusing to pay religious tax and/or those disillusioned with child abuse by the Catholic clergy. Nevertheless, missionaries are mainly sent to evangelize active atheists for whom God has no meaning in their lives.
In other words, there is at least one religious order that has taken the initiative of establishing a Secretariat for evangelization, which has concentrated on keeping recorded data of evangelization and building up a museum for that purpose. When one thinks of so many other religious congregations and missionary organizations that have sent missionaries abroad and of how much personnel and financial assistance have been dispatched from Europe to mission countries, one understands the colossal scale of such undertakings.
Germany has had long experience of missionary involvement in many countries. It has sent missionaries and funded the building of institutions and projects, particularly in Asian regions, in Africa and in Brazil. The vast content of such evangelization programs cannot be compared with the level of missionary activities in Japan.
The content of the missionary activities of this great missionary country will probably not change substantially but the personnel implementing the programs have greatly changed. One of the main reasons is the lack of religious vocations. In Germany vocations to religious life and the priesthood are not abundant. Moreover, just as in Japan, Germany is becoming an aging society.
As a result, religious and priests from Latin America and Africa are being sent to serve the German churches and religious congregations that formerly sent missionaries to their countries. Most probably the day will come when people trained in mission countries through the efforts of such a great missionary country as Germany will have to rally to its support.
In fact, although I was totally overwhelmed by the scale and the wide diversity of activities, I was deeply impressed by the words of the staff of the mission secretariat. They made the following observation: “Since only 1% of the Japanese population is Christian, is there not much missionary work left to be done with non-Christians? Even though most people in Japan do not seem to take an anti-Christian attitude, are there not many persons uninterested in religion who have a kind of negative atheism but could be a target for missionary work?”
From the point of view of evangelization, I feel that there are still many possibilities for pastoral activities in parishes and Catholic education and welfare institutions in Japan. There is a wide range of possibilities open to further development in the missionary enterprises we have been involved in up till now.