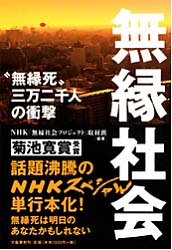 Again I present here an NHK literary work. This is a special NHK program published in book form. On January 31, 2010, NHK aired a TV program entitled “A Society without Human Bonds: 32,000 Human Lives Abandoned,” which attracted the attention of many people. The documentary tells about the shocking reality of 32,000 people dying every year, totally abandoned, without anyone to take care of them. This number equals that of the number of suicides each year.
After the programs were aired, NHK produced some feature shows and news reports on family and social life, and on the results of the deterioration of human relationships in the workplace. The documentaries showed healthy and energetic people who are afraid to meet people. They also took up the problem of child abuse and looked at elderly people living lonely lives in cities despite having grown-up children. The documentaries had a big impact, due to the fear of being abandoned at death, a fear common not only among the elderly but also among people in their 30s and 40s.
Such reactions show us to what extent social bonds in Japan have been lost. The book helps us experience the anxieties of hidden loneliness in this affluent society of Japan today.
The team of interviewers studied official publications where unidentified dead people are counted as “deaths on the road.” This expression refers not only to persons actually found dead on the road. Sometimes nowadays people dying at home cannot be identified, and in some cases nobody wants to receive the corpse. Thus, quite often officials have the bodies cremated.
In order to economize costs only a few lines are provided in the official gazette for cases of disappearance. While the interviewers were looking into the lives of people “dead on the road,” they ran into the harsh reality that, because family links have become thinner, anybody could easily end up among persons “dead on the road.”
A man in deep debt leaves his family, disappears from his home, and dies a lonely death. A divorced man stops living and working at home and finds a new life in a new place where he dies unnoticed. Again, some overworked person is left alone by his family and after forced retirement struggles to revive his family links.
A woman continuing to work to support her parents and brothers reaches the age of 79 and, afraid of being neglected at death even by her own family, becomes a member of an NPO specializing in burial services. Again, an increasing number of elderly people live alone in big apartment complexes that were built everywhere during the economic boom years. This has become a big problem because sometimes, without anybody noticing it, people are found dead days after their death.
Furthermore, since nobody will receive the corpses, they are given to medical institutions. At times, local officials and cleaning companies send the bones after cremation for memorial services at temples in Toyama Prefecture to be kept in the temple charnels. Sometimes only family memorial services are held in the crematories, without any preceding funeral. Those without relatives are buried in public graves. All these testify not only to changes in actual burial practices but also to family values.
Family change comes together with unavoidable changes in society, something we are also responsible for. During the interviews, many mentioned that because this is a family issue they did not want to bother their relatives. In other words, they did not want to be chained to their homes. They preferred to live their own lives. Individualism turns out to be a life style we ourselves choose. Maybe we are no longer able to revive our old traditional warm family values.
This is why an increasing number of people now seek new human links apart from the family. One example is room-sharing among the young. Or we see elderly people refusing to enter an old folks’ home and instead renting common apartments to live together. As mentioned above, others choose to be members of NPOs specializing in burial services. Japanese today are desperately looking for new human bonds.
We find this among the homeless, victims of bullying and child abuse, people afraid of meeting others, people committing suicide, and so on. The real root of many problems now facing Japanese society is to be found in broken traditional human relations. Some scientists indicate that this phenomenon is due to the influence of the global neo-liberal market system of the second half of the 20th century. But in any case, is it not the role of Christianity and religions to propose new human bonds for the Japanese society that has lost its former human links? Are we discovering that for ourselves?