Again this time I will deal with a special NHK program. I have great interest in such documentaries. NHK seems highly motivated for the production of such programs.
The theme this time will be the “50th Anniversary of the Japan-U.S. Security Treaty” Four documentaries were aired from December 4 to December 11 last year. The treaty was signed in 1960 (the year I was born!). Fifty years later such TV documentaries are looking for ways to build new security policies for the future by examining the historical origins of the present treaty. The importance of these NHK programs lies in the well-known fact that the relocation of American military bases from Okinawa has become such a serious diplomatic issue as to cause the collapse of the former Hatoyama Administration.
Most Okinawa residents oppose the American military bases in Okinawa because 74% of all American military bases in Japan are located on their soil. On the one hand, Okinawans urge the removal of all the bases from Okinawa to foreign countries but at the same time most Japanese people think that, in order to maintain the present security set-up with the United States, the American military bases in Okinawa have to be maintained. This has become a tortuous situation. Why is it that the military bases are mostly concentrated in Okinawa? But, first of all, why is the Japanese-U.S. security treaty actually necessary? Literally speaking, since there has been no change for the last 50 years in the content of the treaty, is there hope for any change in the future? Such basic issues came into the open through interviews with the persons concerned.

1) Hidden Face of the American Military
Back in 1960, when the Treaty came under revision, strong opposition arose among the people of Japan. Because of the violence experienced at that time, Americans feared that when the treaty would be revised 10 years later, everything could collapse. Thus, as a result of discussions with the Japanese government, American policy gave importance to diluting the strong image of its military presence by initiating joint maneuvers with Japan’s Self-Defense Forces and by accepting the three official Japanese nuclear-free principles: not to purchase, produce, or give entry to nuclear weapons. The American forces did not feel the need to give any explanation about repeatedly bringing nuclear weapons into Japan.

2) Okinawa the Price for “Peace”
The second theme selected was: Why are American military bases concentrated in Okinawa? In reality, at the beginning most of the military bases were located on the Japanese mainland. Why were they moved to Okinawa?
The conventional view was that Okinawa is geographically strategic, but in accordance with the evidence given by persons concerned, the truth is that in order to soften popular opposition to the military bases on the mainland, Okinawa was a better choice. Moreover, building costs were lower there, and Okinawa was under American administration at the time. The so-called base-approving faction testifies that, as a result of the official policy to promote economic development as well as of American military pressures, there was no other possibility than to accept the bases in Okinawa.

3) The Road to “Alliance”
The Japan-U.S. Security Treaty has basically changed during its 50 years of existence. It started from renting the land to build the bases and proceeded on to a common defense between the American military and the Japanese Self-Defense Forces. Then, with the Japanese SDF’s Iraq mission, the range of military activities was broadened from the Far East to the whole world. The Japan-U.S. Security Treaty suddenly came to be known as a “Relationship Alliance.” Such deterioration of the treaty came about as a result of secret backstage negotiations between the Foreign Office and Defense officials of both countries.

4) How to Protect Japan’s Future
Substantial changes in the world situation have occurred during the last 50 years. On the one hand, the East-West cold war has become past history and, on the other, East Asian security has been greatly shaken by North Korean 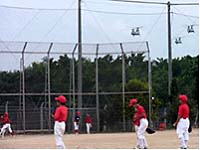 military provocations, by Japan’s northern territories, as well as by incidents involving the Pinnacle Islands. What is really the essence of the Japan-U.S. treaty? How can it deal with Japan’s giant neighbor, China? Where should the focus of Japanese diplomacy be located? How is Japan’s pacifist constitution to be maintained? Learned people do not necessarily agree in their discussions of these issues.
We, at least, should put an end to the unquestioned assumption that there is no way to abrogate the treaty. We must again think for ourselves about the peace and security of Japan.

[In the Social Center we have a DVD of these NHK documentaries. Those interested may contact our office.]