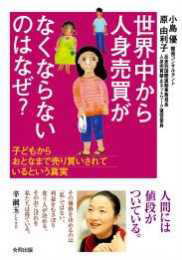 A few days ago I read an article telling the story of a girl from a minority group in North Vietnam who was forced into prostitution and later sold in China by a criminal organization. Since our Center has some assistance programs with Vietnamese NGOs there, I was greatly shocked at this news.
According to enquiries made by the Vietnamese government during a period of 5 years, from 2004 to 2008, about 4008 persons fell victim to human trafficking. And this figure is just a loose estimate. As a result of the one-child Chinese policy, the male population in rural areas has increased and traffickers target girls of tribal groups who want to escape poverty by inciting them to marry in rural China. There are also many cases of girls in Vietnamese cities who are cheated into prostitution as a ruse to get profitable jobs.
Such human trafficking is taking place all over the world. This book offers information on citizens’ movements to protect the victims, explains the historical and economic background of the problem, and, based on the testimonies of victims from all over the world, denounces the realities of human trafficking.
Needless to say, old-style slavery is not accepted in today’s world. Nevertheless, all types of human trafficking, like economic exploitation and traditional social customs which include strong racial and sex discrimination, still remain alive in our societies. For instance, the sex industry, housemaid services, begging, plantation and fishery work, mine work, child soldiers, organ transplantation and so on often end up in human trafficking. However, there is very little reliable data available in this field.
The fact that there are increasing numbers of migrant workers is one reason for active human trafficking. The causes are various, like escape from poverty, the desire for city life, flight from political oppression, and domestic violence or sex discrimination. According to the 2008 ILO Yearly Report, about 200 million workers left their countries to work in foreign lands. This number refers to legal workers. It is believed that illegal ones are more numerous.
Among these, many have been recruited as victims of human trafficking. Persons using illegal means to work abroad are compelled to borrow large quantities of money and thus become victims of forced labor. Even legal migrant workers have their passports and visas taken away and many end up in forced labor. In reality, it becomes difficult to procure accurate figures of human trafficking victims due to the fact that many migrant workers switch from legal to illegal status.
Asia is the region of the world that sends many migrant workers abroad and suffers from human trafficking. During the 1970s and 80s, many left Asian countries to work in Europe and the Middle East, Japan and Hong Kong, Taiwan, South Korea and Singapore. Against the background of the continuing development of Asian economies during the 1990s, movement of workers among Asian countries, as well as human trafficking, increased. The case of Vietnamese girls brought to China mentioned at the beginning is just one example.
Japan is also one of the receiving countries for human trafficking. Before the Second World War, Japanese women were sent to Asian countries to work there in many instances as prostitutes, and during the Second World War many Koreans and Taiwanese were forcibly brought to Japan as such workers. Again, many women from Korea and the Philippines were forced by the Japanese military to work as “comfort women” around Asian countries. These days many foreign workers, amid bad working conditions and low salaries, are employed as students and technical trainees.
Several international organizations and NGOs, along with various kinds of legislation, are working actively to suppress all human trafficking. Nevertheless, since international movement of workers is on the increase, there is no way to decrease human trafficking. This was also true in former days. However, nowadays it is not rare to have foreigners living near us, and so it should be easier not only for officials but also for each one of us to provoke action on this issue. This book, easy to understand, could be a suitable first step. Schools could use it as teaching material. It is well worth reading!