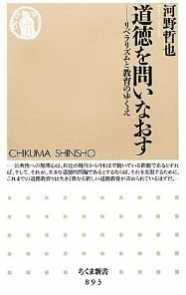 The book review in the Social and Pastoral Bulletin n. 156 was about Michael J. Sandel’s book “Justice: What’s the Right Thing to do?” This time I want to introduce a book concerning moral education written by Kono Tetsuya, a Japanese Ethics Professor, Questioning Moral Education: Liberalism and the Future of Education. The author’s stand is that there is something missing in Sandel’s thinking and thus proceeds to present a fresh approach to ethical education which dissents from today’s Japanese ethical values and the ways of conducting moral education.
Actually on March 11, just minutes after the big earthquakes that rocked Japan (!), a special meeting was held at our Center with the Jesuit Pastoral Apostolate Collaboration Team (JPACT). A teacher of one of the Jesuit schools who was present recommended this book, which I read and found interesting enough to review in this Bulletin.

Professor Sandel’s ethical thinking deals with (1) Utilitarianism (looking for maximum happiness for the majority) (2) Libertarianism (making individual autonomy and free contract the supreme theory) (3) Aristotelian philosophy or the quest for virtues (making object of all existence for the norm of morality) (4) Kantian philosophy on freedom, obligation and right based on human dignity as an existence with reason (5) The political thought of Rawls, stressing the gaps in today’s society that impede individual autonomy and free contract, and finally, as an important position of Professor Sandel, (6) Communitarianism, or in other words, that humans should foster their identity within communities and assume communal responsibilities there.
The author of the book under review disagrees with Sandel’s view of communitarianism. He claims that there are limits to communities’ moral education.
In the case of Japanese society, communities suppress individuals so much that they often alienate them. Traditional moral education in Japan excludes politics from ethics and selects exclusively psychological issues. In criticizing this approach, the author stresses that the core of human rights lies in freedom, independence and equality. Thus, moral education must teach the basics of democracy on which the political system rests, because such a political system guarantees freedom, independence and equality.
On the other hand, the banner of modern liberalism is precisely “freedom, independence and equality.” However, pointing out that modern liberalism has fallen into “individualism and conformity,” the author claims that education for a type of citizenship that educates people to become independent from the community while not being afraid to reform the community out of sympathy with the needs of others, is greatly demanded nowadays.
The concrete content of such education will be: (1) Political literacy (capacity to understand and analyze information, to take action), (2) Volunteerism and service learning, (3) The ability to sympathize with others, especially with the alienated. In any event, the author insists that the final objective of moral education is not to impose on students a list of virtues, but to discover in contact with others the moral goals they should put in practice and to learn how to strive to implement them.
On the occasion of the series of huge earthquakes in northern Japan, campaign slogans like “Unite,” “Cheer up,” or “Sympathize with others” can be seen everywhere. That’s fine, but on the other hand when it comes to criticizing the Tokyo Electric Power Company regarding the Fukushima nuclear accident, some will say, “This is not the proper time to criticize the company, because they too are working hard to provide solutions for the accident.” The slogans “Unite” and “Cheer up” have become goals in themselves, but I believe that important issues like “for whom” should we cheer up or become united, or “why or how to do it” are not discussed enough.
Nevertheless, if, as Prime Minister Kan says, “We will not restore the old Japan but build a new Japan,” then open political debate must be held that includes local governments and the ultimate cost of nuclear energy. Is not this the best time to prove our citizenship?