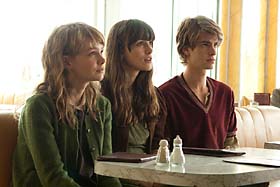 This time I picked a fictional film. Among films I have happened to see this is the most beautiful and the saddest I have ever seen. The source of this movie is the novel Never Let Me Go written by the English novelist Kazuo Ishiguro and published by Hayakawa Epic Books in 2008. The film has the same title.

The setting is contemporary England. Nevertheless, there are some differences. For instance, in the movie the actors make their own clones and, whenever necessary, they are allowed to transplant organs from the clones produced. The heroine and her male and female friends, three of them, were born as human clones and were raised in a boarding school till they were 18 years old.
Education at the school concentrates mainly on health preservation. It is strictly forbidden to leave the school without permission and those who break this rule will have to face a death sentence. On the other hand, students are encouraged to take arts and place their artistic paintings in a “Gallery.” A woman visiting the “Gallery” will gather the paintings and take them home.
Once they reach 18 years, they will live in cottages, in groups of 10, together with young people from similar schools in that region. There they are allowed to go out and sometimes couples are formed among young people living in the cottages. When the need comes, they act as donors for organ transplants. Organ transplants from the same donor, on the average, are complete after 3 or 4 times. “Complete” means that the donor dies.
According to rumors circulating among them, couples that love each other can make applications to have the organ transplants delayed for some years. But the girl friend takes the boy friend from the heroine and the broken-hearted heroine leaves the cottage to work as a caregiver. Later, both separate and the three friends part.
After 9 years the caregiver heroine meets with her friend, who has already finished two organ transplants and has become quite weak. The girl friend regrets having stolen the boy friend from the heroine and wants to return to the former friendship the three of them enjoyed in the past. Then after looking for the whereabouts of the boy friend, she finds him and finally the three of them reunite.
The girl friend completes the third organ transplant and the boy and heroine start their friendship again, but the boy has also finished his third organ transplant and weakens. Then, remembering the old rumor that couples loving each other have the possibility of extending the period of organ transplants for several years, both of them look for the woman in the “Gallery” to apply for that privilege.
However, the rumor had been groundless. The real reason for gathering the paintings from the students at the “Gallery” was not to know how human the couples formed by the students were, but, on the basis of discussions concerning how ethical organ transplants from clones were, it was to probe whether human clones were really human. In this way, the boy friend has his fourth transplant performed while the heroine watches, and this completes all his organ transplants. Shortly afterwards, the heroine also has her first transplant.
Ishiguro, the original author of the work, asserts that he is not interested in the theme of clones. His field of interest is the issue of what is really important in life. This film, while dealing with a shocking theme, shows calmly beautiful scenes where the actors peacefully exhibit their sadness. The human drama, apart from the theme of cloning, is very attractive.
Nevertheless, organ transplanting from human clones is a huge ethical issue. People interested in this are urged to watch the movie.