Japan has not yet recovered from the damages of the great earthquake and the disastrous crippling of the nuclear reactors. As a result, people tend to get depressed. So this is a good time to watch a film that will inspire and enliven us. I have chosen a truly enjoyable film: “Enjoying Playing Drums – INCLUSION.”
This film depicts the concerts and daily activities of a professional musical group playing Japanese drums, which runs an organization for mentally retarded persons called “Zuiho Drums” in the City of Unzen, Nagasaki Prefecture. Since 1978, the year their activities began, they have been living in their “Unzen Colony.” 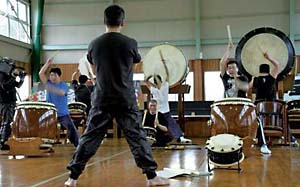 The Colony is not an institution for the disabled, but a socio-welfare enterprise that rents private apartments for disabled people who have jobs and are capable of living by themselves in ordinary local communities. They ran a welfare institution that was considered to be “a transitional shelter.” Their objective was to enable people to live independently in local communities. During the 30 years of their existence about 12% of their members were sent out annually into society with fixed jobs.
In order to assist 1,800 disabled people living in nearby communities, they have now closed the welfare institution to start multipurpose small-scale welfare services. The services consist of running group homes, bakeries, and food businesses where the disabled can work and helpers can be dispatched to assist disabled couples in their daily life. The subtitle of the film, “Inclusion,” refers to this enterprise of assisting disabled people to become part of the local community where they live without becoming victims of discrimination.

To be sure, local communities did not initially show true understanding regarding such attempts. Local residents and apartment owners were reluctant to accept group-homes and rent private apartments to the disabled. The disabled countered this reluctance by making an effort to greet their neighbors. By doing so, they could not be disregarded. Through thus exchanging a few words of greeting, they became open to one another to the point of exchanging food items as well.
In this way a gradual process of “inclusion” took place, an unusual occurrence in Japanese society. It was a real miracle. A man with mental disability belonging to the picture production group that interviewed the “Zuiho Drums” was asked by the leader, Mr. Iwamoto, himself also disabled, “Don’t you want to get married?” He answered, “Of course I would like to get married, but since my parents are opposed, I have given up the idea. They think that unless they protect me I cannot do anything by myself.” To that Mr. Iwamoto replied, “You need to speak to and persuade your parents as an ordinary member of society, not as a disabled person.”
Certainly, the daily life of Mr. Iwamoto, father of a family as well as a professional drum performer, and of his wife are tough and demanding. They are supported by helpers serving them at home, but their consciousness as parents and the sense of being professional musicians transmits itself clearly to others.
Mr. Iwamoto’s mother, who was divorced while he was still very small, took him, his elder sister, and younger brother out of Unzen. He was placed in an institution and his father died soon after. Years later he got married, and when he took his son to visit his mother, she cried and said, “You have become a respectable parent! How wonderful of you! Despite your disabilities you got married and started a family. You can live happily.”
It is because of their disabilities that these musicians can give themselves to playing the drums and to building a family. The more we understand their sincerity, the less we will exclude them for being disabled. In fact, it is the same regarding inmates who have left jail, the homeless, and foreigners. Our societies grow richer and richer by accepting all kinds of people as equal members. The wonderful performances of the “Zuiho Drums” give eloquent witness to that.