This is the title of this year series of lectures about the Social teaching of the Church, organized by this Center and held at St. Ignatius Church. 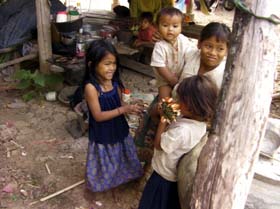 Every year I go to Cambodia for a study tour organized by an NGO called “Solidarity with the People of Cambodia” (“Camboren”). There, beyond any doubt, this “Culture of Death” with its consequences, and the “Culture of Life” that brings about hope can be clearly seen.
In April 1975, the army of Pol Pot took control of the capital Phnom Penh. Though the exact number is not known, it is said that from then until 1979, for a period of 3 years and about 8 months, more than 3 million people were killed by the Pol Pot regime. A few kilometers from Phnom Penh is one of the so-called “Killing Fields.” There, many intellectuals, teachers, doctors, artists, policemen and others were killed after being cruelly tortured. You can see the pits where these people’s remains were buried. At the front from the entrance there is a memorial tower where many skulls are preserved so that visitors will not forget but pray for the victims. It is certainly a clear manifestation of the “Culture of Death” and its consequences.
After the Pol Pot army was forced out of Phnom Penh in 1979 and till 1998, the internal war continued. Pol Pot’s army, the new government’s army, and the armies of the USA, Vietnam and others that supported one or the other of these laid down countless landmines.
It is estimated that there are still several million mines and unexploded bombs shallowly laid under the ground. The number of victims handicapped by these mines keeps growing every day. The “Culture of Death” does not end easily.
But alongside the scars of this “Culture of Death” we can find in Cambodia today a “Culture of Life” that brings hope and is becoming stronger.
For example, in Phnom Penh there is the “Center of the Dove,” a technical training school for handicapped people run by the “Jesuit Service Cambodia” (JSC). There every year around one hundred people who have been handicapped by the war and its consequences and who, because of that, have lost all hope and self-esteem form small living communities and, after learning how to read and write, receive training to repair bicycles, motorcycles, radios, television sets or some other skill. Almost all of them recover their self-confidence and either get a job or start their own small repair shop in their village. 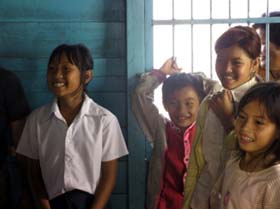 Also in Phnom Penh there is the “Light of Mercy Children Home,” run by the Sisters of Mercy with the support of JSC and Camboren. More than 30 children with various disabilities live together there and support one another while attending a school appropriate to each one’s disability. Whenever we visit them, we cannot but feel the power of life through their smiling faces.
There are many other projects run by JSC, some supported by Camboren. Through all of these we feel deeply the “Culture of Life” overcoming the “Culture of Death.”