FROM THE CATHOLIC WORLD(161)

＜Christians Reaching Out to Muslims in Tanzania＞
The Catholic Church is helping to transform life on an island off the west coast of Africa through its interreligious and educational work — with the help of charities in Britain and Ireland.
The expansion of the Church’s work, aided by the construction of a new church and pastoral center on Pemba — the second largest island in Tanzania’s Zanzibar archipelago — will have a significant impact on society in the predominantly Muslim country.
The Pastoral Centre in Chake-Chake, near the centre of the island, will help the whole society and encourage good inter-faith relations with the Church’s Muslim neighbors according to Holy Ghost Father Father Apolinarius Msaky.

＜Unemployment Is More Than an Issue＞
The leader of the U.S. bishops’ conference is urging his brother prelates to bring the “scandal” of poverty and unemployment to public attention.
Archbishop Timothy Dolan of New York made this appeal in a Sept. 15 letter to all bishops. “I hope we can use our opportunities as pastors, teachers, and leaders to focus public attention and priority on the scandal of so much poverty and so many without work in our society,” he wrote.
The archbishop said his letter came in response to a request from the bishops’ administrative committee, which reported that 46 million people (15%) now live in poverty in the United States. Archbishop Dolan’s letter requested the bishops to continue to “do all you can to lift up the human, moral and spiritual dimensions of the ongoing economic crisis.” Unemployment numbers “are not statistics,” he reminded, “but people suffering and wounded in their human dignity.”

＜Iraq Prelates Take Concerns to Council of Europe Leader＞
Two prelates from Iraq told the president of the Council of Europe that there is simply no religious freedom in the country. Archbishops Bashar Warda of Erbil and Amil Nona of Mosul affirmed this when they met with Hermann Van Rompuy, Aid to the Church in Need reported.
The two Chaldean-rite archbishops stressed to the European leader that there is a need for Christians to receive help to build schools, saying that Church-run education would benefit the whole society.
”Education would help to develop a new culture as well as freedom of religion, opening up new perspectives for young people,” Archbishop Warda said.

＜Pope Gets at Root of Unemployment＞
The editor of the Vatican’s semi-official daily newspaper says that Benedict XVI went to the root of unemployment during his one-day trip to Ancona on Sunday.
The Pope was at the Italian seaport town to close the 25th National Eucharistic Congress. He gave two full-length addresses and a homily.
The Holy Father called for re-establishing the primacy of God, because “man needs bread in order to live. He needs his daily bread of course, but above all he needs the true bread which is Christ himself.”

＜Immigrant Victims in Libya Point to Precarious Security＞
As Interpol today issued an arrest warrant for the ousted dictator of Libya, the apostolic vicar of Tripoli has said he’s catching “signs of real peacemaking efforts.”
Bishop Giovanni Martinelli spoke about the first days of life in Libya without Muammar Gaddafi. “The developments are difficult to predict,” the bishop said.
The 69-year-old Franciscan bishop, who has led the Church in Tripoli since 1985, did express concern about the plight of African immigrants in Libya. There have been various reports of violence against them.
Bishop Martinelli said that the violence was proof of one thing: “What is certain is that these episodes demonstrate that there is no full security in the country. The authorities of transition have however stressed that their priority is security. We will see how this path of reconciliation develops. Hopefully for the better.”

＜Church Aiding Victims of New Violence in Sudan＞
The Blue Nile State of Sudan, on the border with South Sudan, is the site of another outbreak of violence.
Conflict broke out in Damazin town Sept. 1 between the Sudanese military, based in Khartoum, and soldiers aligned to the Sudan People’s Liberation Movement North, following armed attacks on government buildings.
Both sides blamed each other for the attacks and on Friday, the Khartoum government declared a state of emergency in Blue Nile State.
Auxiliary Bishop Daniel Adwok of Khartoum, who is episcopal vicar for the pastoral region of Kosti, which includes Damazin, has drawn up emergency plans for the parish of Singa, where thousands of displaced people are gathering.
According to the Sudan Human Rights Organization in Cairo, 17 people were killed, and tens of thousands are living in basic conditions outside Damazin. 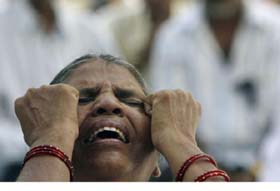 hristians in the state of Orissa are welcoming a Monday high court decision mandating the National Human Rights Commission to draw up a status report on efforts to compensate victims of anti-Christian violence.
The decision responds to the outbreak of violence that began almost exactly three years ago, when nearly 300 villages were attacked, bringing the deaths of more than 70 people.
At least 25,000 people fled for their lives in the violence that was sparked by the killing of politician Swami Laxmanananda Saraswati, on Aug. 23, 2008.
Father Manoj Kumar Nayak, director of the archdiocesan social service center, told UCA News that the Church has petitioned the government several times about property destroyed in the violence, but has yet to receive any compensation.

＜Vietnamese Parents Beg Prayers After Arrest of 15 Youths＞
Vietnamese authorities arrested 15 Catholic youths in July and August, six of whom are being held in Hanoi, while the whereabouts of the other nine is unknown.
The families say their children are innocent of any crime, and that they should not be punished for involvement in social activities that promote the common good.
According to the Human Rights Commission in Vietnam, at least 258 political prisoners and prisoners of conscience are in Vietnamese prisons.
The U.S. State Department’s 2010 report on religious freedom noted the “significant problems” in Vietnam with regard to this human right.

＜Sri Lanka＞
Magis, the Italian Jesuits’ NGO, and the Italian Bishops’ Conference, are funding a project run by the Jesuit Social Centre in Galle, southern Sri Lanka, which supports widows and their families, over 800 persons in total. This group of people has the least possibilities to earn a living wage and send their children to school. The support is not only financial but also psycho-spiritual, through self-help groups and by teaching the mothers how to meditate in the Buddhist tradition.