Rooted and built up, firm in Jesus Christ. - A Reflection on World Youth Day 2011 –

Let me start with a simple reality. From 15 to 22 August, about two million young people from every country under the sun gathered in Madrid under the banner of the Holy Catholic Church to participate in the World Youth Day events. At a time when the economic crisis is affecting the lives of millions, when the very existence of God is being questioned, when young people have their own problems to solve, such a huge number gathering in Spain means something beyond a mere mega event. We know that the West is undergoing a crisis, a crisis that is affecting all spheres of daily life ? relationships, family, society, finance, development, culture and faith.
As preparation for the WYD week, participants from all over the world traveled various pilgrim roads leading to Madrid. They spent time in prayer and reflection, sharing and exchanging faith experiences. Throughout the WYD week, various seminars, prayers services, exhibitions, musicals, and pilgrimages were organized in order to help the participants experience and express their faith in Jesus. I would especially like to mention the catechesis focusing on the central theme of the WYD Madrid 2011 – Rooted and built up in Jesus Christ. Firm in the faith (Col 2:7) – which further was simplified as “faith nourishing and faith sharing.”
On the last day, more than two million youth marched to Cuatro Vientos airfield to participate in the night vigil and the Papal Mass the following morning.
The most touching moment of the WYD saga came during the vigil after a heavy thunderstorm when the Holy Father invited the participants to bow in adoration before the Blessed Sacrament. Everyone, everything came to a standstill – people stopped moving, talking and waving flags! The vigil prayer service was surely something that the participants would cherish for the rest of their life. Certainly our faith was confirmed when the Holy Father said, “Your faith is stronger than any thunderstorm!” On the following morning, we had the closing Eucharist with the Pope and thus bade farewell to the WYD Madrid 2011.
Now as I reflect over my own participation in the WYD event, I understand that it was not a mere crowd that had flocked to Spain for a holiday or merrymaking event. Every pilgrim at the WYD had a single objective in mind and heart ? to express their faith in Jesus. I had the privilege to speak to a number of youth from different parts of the globe and all had something in common to share. They were in Spain for Jesus. That was sure from the bold testimonies and hidden sacrifices that each had to make.
From the economic perspective, it is true that the world is going bankrupt. Looking at sacramental life, it is clear that the sacraments are no longer “popular” among the young. The Church is concerned about thousands who are leaving the Church. But would all those young people have undertaken such an expensive trip to Spain had they not had faith in Jesus? .
History has shown that popular fervor for a particular passion gradually dies a natural death. However, ever since the first World Youth Day was initiated by Blessed Pope John Paul II in 1985, innovations have been added to the event. One thing that has never changed over the years is the opportunity to express one’s faith. Each of the past WYD events has given opportunities to celebrate and share one’s faith. They have brought youth from all over the planet under one open sky. While the event itself celebrates the Catholic faith, the invitation to attend extends to all youth, regardless of religious convictions.
As Pope Benedict XVI said in his message to the WYD pilgrims, in every period of history, including our own, young people experience a deep desire for personal relationships marked by truth and solidarity. Thinking back on his own youth, the Pope noted that stability and security are not the questions that most occupy the minds of young people. Normally, the main thing that youth want is not to settle for conventional middle-class life, but to desire something great, something new. In the prime of youth each one wants to discover life itself in all its grandeur and beauty. Part of being young is desiring something beyond everyday life and a secure job. We were created for something great, for infinity. The desire for a more meaningful life is a sign that God created us and that we bear his “imprint.”
As we see around us in many parts of the world, particularly in the West, today’s culture and human tendencies tend to exclude God and to relegate faith to a purely private issue with no relevance for life in society, totally detached from our neighbor. For this reason the Holy Father encouraged youth to strengthen their faith in God, the Father of our Lord Jesus Christ. According to the Pope, the present generation is the future of society and of the Church!

Unfortunately, many people around us have no stable point of reference on which to build their lives, and so they end up deeply insecure. There is a growing mentality of relativism, which holds that everything is equally valid, that 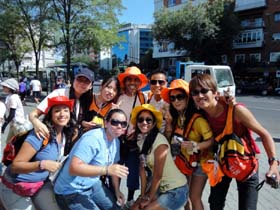 truth and absolute points of reference do not exist. But this way of thinking does not lead to true freedom, but rather to instability, confusion and blind conformity to the fads of the moment. The youth of today are entitled to receive from previous generations solid points of reference to help them make choices and on which to build human lives?like a young plant which needs solid support until it can sink deep roots and become a sturdy tree capable of bearing fruit.
The above message of the Holy Father summarized the present state of our youth and the need for a renewal, a longing for newer and brighter horizons. I am certain that for most of those two million youngsters gathered in Spain enduring the scorching summer heat and an unexpected chilly thunderstorm, being part of the Holy Catholic Church was more important than merely participating in a global event. Against this background, I feel the purpose of the WYD 2011 was achieved. The central theme of the WYD Madrid 2011 – Rooted and built up in Jesus Christ. Firm in the faith – will draw more people to God, will bear more fruit, will give more meaning and color to their lives. That will take us to a new level of firm faith rooted and built in Jesus.