I would like to introduce the “Free Legal Consultation” services that began in the Social Center at the beginning of January 2011.

All of us meet foreign residents in Japan in our daily life, through religious services, educational institutions, or work places. More than half of all the Japanese Catholics belong to many different nationalities. Anyone in contact with foreigners in Japan realizes the complexity of the situations they face, their need to be trained in the Japanese language, and the legal barriers they encounter.
When this Social Center moved to Kibe Hall in Yotsuya, one of the tasks given us was to search for ways of closer cooperation with St Ignatius Church. One of the decisions the Social Center took was to try to provide radical solutions to key issues faced by foreigners in weak positions, like refugees, single mothers, or others unable to find themselves solutions for their problems on their own. Thus, we decided to conduct legal consultations. But for that we needed lawyers. Last October, a resident in Japan of Singaporean nationality, Ms Jessie T. agreed to work with us part time.
Articles in the mass media published last November concerning a new Section of Legal Assistance for Foreigners at the Tokyo Public Law Office caught my attention. The head of the new Section, Suzuki Masako, graduate of Sophia University, came to visit us and we discussed the possibilities of cooperating. After negotiations at the Tokyo Public Law Office with three interested lawyers, we decided to start free legal consultations once a month at the Social Center. Free legal access began in January 2011 and we soon realized the need for personal interviews before meeting with the lawyers in order to focus the issues and provide for interpreters and translators. At present, we have in our files 35 legal cases, already solved or waiting for solutions. 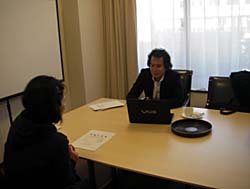 ANGI (anonymous) called us by phone from the immigration jail several months ago. She is a Filipina single mother with 3 children, all born in Japan, age 1, 2, and 4. She was detained in January 2011 for lack of proper documentation. Her children were placed in a welfare home and could not meet her for over 8 months. She was very poor. We visited her in jail with a lawyer, provided some funding, etc. She was deported with her children in June this year 2011.
ANGEL (anonymous) came to us asking for legal advice. She was working very hard on weekends in a pub but did not receive her salary for about two months. In July she met our lawyer. Next, the Labor Office intervened, but without success, and finally her case is now in court. The hearing takes place this November. We are providing an interpreter.
NGUYEN (anonymous), claiming to be a refugee from Vietnam, has appealed to the Japanese government for recognition of his refugee status. The appeal was denied three times and he asked us for legal assistance in August 2011. One of our lawyers is taking care of his case. Many documents need to be translated into Japanese.