The number of volunteers that helped out in the disaster zones under the aegis of Caritas Japan after the Great Easter Japan Earthquake totaled over 3,000 and this number continues to increase steadily. I’d like to express here my admiration and gratitude for the volunteers that put so much effort into their work, to those in charge of the “Sisters Rally” group which supported numerous volunteer activities, and to all who have served continuously at volunteer centers from the beginning.
There are still people living amid great difficulties in the disaster areas. Assistance to the victims and supporting activities has by no means ended yet. Nevertheless, at this stage 8 months since the earthquake, there is significant need for reflecting on the activities undertaken during this period. 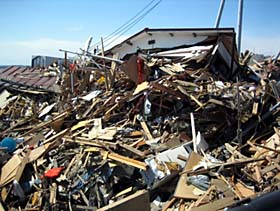 On the last day, more than two million youth marched to Cuatro Vientos airfield to participate in the night vigil and the Papal Mass the following morning.
I write this article both as a Catholic volunteer who worked in the disaster area and as someone who myself formerly received assistance from volunteers. When the Great Hanshin Earthquake struck in 1995, I was a university student and my family suffered severe damage as victims of this disaster. The Hanshin disaster drew scores of volunteers from all over and thus made a mark in history as the first year of “volunteerism.” However, many volunteer groups that went to help also suffered along with the victims from lack of shelter. This brought about within me a feeling of deep anger toward the pastor of my parish. Fortunately, our parish buildings had escaped damage, so many volunteer groups looking for shelter approached the church for shelter, but the pastor declined their requests since they were outsiders. Dissatisfied with the pastor’s uncooperative attitude, I sought the advice of a different priest and, to my surprise, was asked to reflect on my own past relationship with the parish. In other words, I was told that if before the earthquake I had happened to be more closely related to the parish, then the pastor would most probably have listened and entrusted everything to me. Surely I was so busy taking care of my own family right after the disaster that I was unable to aid other victims and or go to the assistance of other parishioners.
Great disasters cause great damage to the region where they occur, but at the same time they bring to light pre-existing local problems. In my case, the degree of my relationship with other members of my own Christian community was brought into relief. Immediately after some natural disaster few people will point out to suffering victims what the local problems are or how these relate to them.
However, the suffering and sadness ensuing on some disaster should not remain unquestioned. My view is that, if we want to find a valuable message offered here, it is most important to contemplate the experiences which many victims and volunteers have gone through and the issues felt by them. Here I want to recount what I spontaneously felt.
Two weeks after the earthquake, on March 24, I set out for Ishinomaki Catholic Church to help set up a base for Caritas Japan volunteers. Three days later, March 27, was the third Sunday following the disaster. Many of the faithful that flocked to the church and were able to meet for the first time since the earthquake embraced one another with tears. That day I went to help clean up the houses of several parishioners. Two weeks had passed and all houses were still uninhabitable. The church building had not been affected by the tsunami, but why was it that the faithful had not gathered at the church for two whole weeks? This puzzled me, and I recalled my own experience of 16 years previously and felt once more that most probably the Christian community had not been truly functioning. When we are really in need, our churches do not function as a common place to assemble.
What happened a month after the earthquake disaster? The one-billion-yen donation for the disaster area had not yet reached the victims. In those days of total devastation the distribution system was not functioning due to destruction of the administrative bureaucracy. That became a problem. However, when the ordinary systems do not work, the most important thing is to make use of pre-existing local communities and organizations. The mass media reported that Buddhist temples and other local communities became the main providers for private shelters. The importance of communities or local human relationships, free from bureaucracies, came under review after the disaster.
Many religious leaders are aware that they have been challenged and, on the other hand, local residents belonging to old communities in danger of being extinguished have put their hopes in the support of newly existing communities. That is why many religious leaders have entered the disaster areas in cooperation with various NGOs and NPOs. 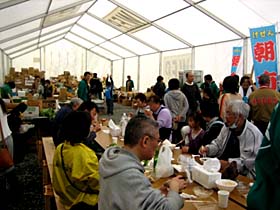 Nevertheless, outsiders cannot succeed in becoming the central actors in local communities. Pre-existing local communities are needed. Thus, when some natural disaster occurs, the relationships existing within the communities are brought into question. In May, the residents of Rikuzen-Takada decided to open a “Morning Market.” The elected chairman of the executive committee, Hashizume Shinji, explained: “Before the disaster occurred I myself along with others had been looking for ways to create jobs for local people. Since those companions themselves had become victims of the earthquake, we could easily decide together the activities needed to stimulate the residents. The crisis that had been felt before the disaster regarding the threatened extinction of local industry led to a sense of solidarity among the people and became also a source of action during the emergency period.”
Sakuma Chikara, from the Volunteer Base of Ishinomaki and Miyako, during a space of over 4 months, sent me the following message: “The greatest fear faced by everyone, victims included, is the danger of forgetting the disaster.” He also added: “This disaster cannot be considered to be merely a disaster. The same can be said with regard to the nuclear power plant accident. It was more than an accident and we must take it as a God-given opportunity to look for new ways.” I consider this a very important remark. We should not forget that sending relief to the earthquake victims and working as volunteers does not end there. It is important for volunteers to bring back home with them the experiences and problems faced in the disaster zones so as to initiate new action in their own milieu.
From the point of view of a volunteer that has worked in a disaster area I want to challenge people with the following: “At the moment of such a natural disaster, do you gather together with the Christian community of your parish?” And in case of non-Christians the question could be: “Suppose some natural calamity occurs. Will you have a community to go to?” But if, before the disaster occurs, such communities do not normally act locally and in unison, bound together by a similar social awareness, then they are meaningless.
Calamities occur suddenly and reduce the peaceful lives of people to the level of material and social hardship. If in peaceful times communities are unconcerned about people living at the bottom rungs of society, they will be unable to share their hardships when an emergency occurs. To what extent are you engaged in the local issues of your own area, especially concerning persons that remain on the margin of society? It may be easy to assist victims of natural disasters in faraway African and Asian countries, but is it not true that when it comes to people living in difficult circumstances close to home, we see a great gap between them and ourselves?
We need first of all to revise our relationships with our local communities. If we really want to live in solidarity with the victims of northeastern Japan, shouldn’t we look to the groundwork of our local communities? These should be communities walking and talking together with people who are suffering.
Such are my thoughts upon reflecting on the meaning of the suffering of so many victims of the recent disaster areas.