The Jesuit Refugee Service (JRS) and Refugees in Japan

During the very severe Italian winter of 1538, Ignatius of Loyola, founder of the Society of Jesus, and his first companions opened the doors of their headquarters in Rome to shelter the many refugees and sick people that were looking looked for asylum as a result of hunger and disease. Ignatius and the companions begged for food supplies and firewood to take care of these homeless people. In one year they provided for more than 3,000 refugees. The Jesuit Refugee Service (JRS) was founded as a work of the Society of Jesus in November 1980 by Fr Pedro Arrupe, then Superior General. JRS was officially registered as a foundation in Vatican City on March 19, 2000.
JRS programs are found in 51 countries around the world, providing assistance to: refugees in camps and cities, individuals displaced within their own countries, asylum seekers in cities, and those held in detention centers. The main areas of work are in the fields of education, emergency assistance, healthcare, livelihood activities and social services. At the end of 2010, more than 500,000 individuals could be counted as direct beneficiaries of JRS projects.
Former Superior General Peter-Hans Kolvenbach expressed his recognition of JRS work for refugees around the world in the following way: “JRS plants a seed of hope in the aridness of refugee camps, where people’s future is so often in jeopardy. This is particularly the case for young refugees in despair who are unable to gain access to education. Day after day, year after year, they see their lives becoming more and more hopeless.
”It is especially in these camps that JRS becomes an urgent service of hope for refugees. Hope increases when we 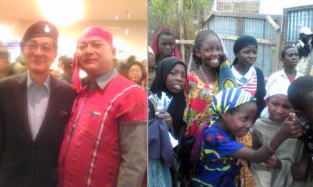 help refugees have faith in themselves and in their future. It increases when love is shown in deeds of education and vocational training which transform past and present hatred into life with the wisdom which enables reconciliation and offers them the hope of a different future.”
More than 1,400 workers contribute to the work of JRS. Many of these work on a voluntary basis, including about 78 Jesuits and 66 religious from other congregations. In 2010 the Global Concerns Institute of Sophia University paid a visit to the JRS refugee Kakuma camp in Kenya, where JRS conducts various programs, like Counseling, Mental Health, Safe Haven and Education.

Convention on Refugees
The Convention on Refugees was approved by the General Assembly of the UN in 1951. Japan joined it thirty years later. According to the Convention, a refugee is “a person who, owing to well-founded fear of being persecuted for reasons of race, religion, nationality, membership of a particular social group or political opinion, is outside the country of his nationality and is unable or, owing to such fear, is unwilling to avail himself of the protection of that country; or who, not having a nationality and being outside the country of his former habitual residence as a result of such events, is unable or, owing to such fear, is unwilling to return to it.” Nevertheless, the pre-history of the Convention goes back to the Holocaust of World War II, when protection was offered to people fleeing persecution under communist regimes. Nowadays the situation of the refugees has changed and new challenges have occurred. The definition must be broadened to protect those who have to leave their land due to economic policy failures, national collapse, natural disasters, and the increase of urban refugees. It is a pity that national borders around the world have been closed and hostility towards unknown persons is on the increase.

Japan’s Recognition of Refugees
After the Vietnam War, from 1978 to 2005, Japan accepted 11,000 refugees from Vietnam, Cambodia, and Laos. Nevertheless, only 577 out of 9,887 applicants were qualified as refugees according to the Convention.
In the year 2010, immigration authorities released the following figures: 1,202 persons (342 Burmese, 171 Sri Lankans, 126 Turks, 109 Nepalese, 91 Indians and 363 from other countries) applied for refugee status, but only 39, mostly from Burma, had been accepted. Compared with the previous year it was only an increase of 9. Thirteen have objected to the official decision and another 363, mainly from Myanmar, have been given temporary visas for humanitarian reasons. Compared with Western countries (19,800 persons for the USA, 11,154 for Canada, 9,693 for England, 8,115 for Germany, 7,924 for France, and 2,230 for Italy), Japan’s acceptance of refugees is quite low.
In the year 2010, the Japanese government started a pilot program which accepts refugees resident in a third country, like the acceptance of 27 Burmese from 5 refugee families and 26 more from other 6 families in 2011 living in the Mera refugee camp of Thailand. This program is a step forward but has many shortcomings. According to the Mainichi Newspaper (2012/1/14), two of these refugee families moved to a farm in Chiba Prefecture but, due to misunderstandings with the rural host family, went to live permanently in Tokyo.

Forum for Refugees Japan (FRJ)
The Migrant Desk at the Jesuit Social Center in Tokyo offers free legal consultations, besides supporting the Adachi International Academy. Nevertheless, a need was felt to expand its services to defend the rights of refugees living in Japan and provide assistance through the “Forum for Refugees Japan” (FRJ) network. Thus, two years ago we joined FRJ.
Japan’s Ministry of Justice, feeling the need to cooperate with citizens’ groups giving assistance to refugees, has started a concrete revision of its policies concerning refugee status requirements, immigration jails, resident permits and self-support and, as a result of recognizing its limitations, conducts normal discussions with the members of FRJ.
As a concrete example, 4 Burmese refugees who received provisional relief permits at Narita airport were accepted by the Japan Association for Refugees in Yotsuya. The Catholic Tokyo International Center provided lodging, clothing, and daily services as needed. Further, a Sisters’ Congregation now holds Japanese language courses for them.
I hope that, thanks to such private efforts, compulsory detention of refugees can be commuted. The Jesuit Social Center continues its relationship with JRS and its cooperation with the Forum for Refugees Japan. Added to this, last year I inaugurated a group of students called “Sophia Refugee Service.” My aim is to engage university students in concrete activities for refugees.