Every Wednesday for the past 20 years the former “military comfort women” of the Japanese army during the Second World War have conducted protests in front of the Japanese Embassy in Seoul, totaling now 1,000. Having decided not to put aside and forget the bitterness of the elder harumoni, they demand sincere replies to the victims from both Japanese and Korean governments. However, the Japanese government disregards their pleas, taking it for granted that the whole issue has already been resolved.
Even in Japan, North Korean high schools have been deprived of their gratuity status regarding school fees. On the other hand, grants provided over the years have been cut or discontinued by the governors of Tokyo and Osaka. Again, the harassment and bashing of people with North Korean citizenship are unpardonable.
Japan is asked to make just apologies and compensation for the damages done up till now, so that those who have received inhuman treatment may recover their human dignity. If politicians and educators confront such issues and act accordingly, Japanese society as a whole will profit. Above all, I hope that a clear historical vision can be provided.

Questioning the 100 years since the Annexation of Korea by Komori Yoichi and others (Iwanami Shoten, 2011) 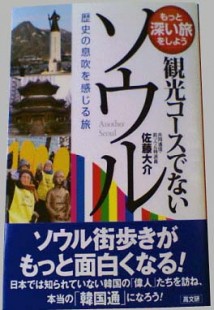