Some Present Activities of the Social Apostolate of the Korea Province

The Korea Province social apostolate is now focusing its energy and manpower on 3 works [1] various services, community building, and advocacy for foreign migrant workers in Gimpo, Gyeongki Province (3 Jesuits and 1 full-time lay collaborator) [2] An integrated social and pastoral apostolate in a Seoul neighborhood   (2 Jesuits and 5 full-time lay collaborators) [3] participating in protests against the planned construction of a naval base on Jeju Island (4 Jesuits spending major time, and several more giving part-time support.)

[1] Gimpo Yiutsari (foreign migrant workers’ center)
‘Yiutsari literally means ‘living as a neighbor.’ This center offers counseling services, teaching of the Korean language, and helping national groups in their community-building through cultural and religious events. Fr. Kim Chong-dae is the center representative, and a lay collaborator, Ms. Shin Dae Yun, is the center manager. Two Jesuit scholastics are now doing their regency there 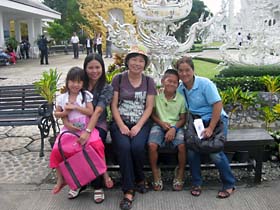 Last autumn the center manager used her ‘sabbatical’ to make a trip to Thailand to visit the workers she had come to know. She wrote a letter from a place named Udontani, which sends the most workers to Korea. She wrote “The Sarane family here had both parents go to Korea to work, leaving their son in the care of grandma. When they returned 6 years later their son wasn’t familiar with them and didn’t listen to them. It took 6 months to restore the relationship. They said if they go abroad again only one parent will go. My trip has made me realize that we Koreans should not think of these people as ‘foreign migrant workers’ but as ‘parents’ working for their children’s education. Then they will suffer fewer insults and withholding of wages, won’t they?”

[2]   Muak-dong ( integrated pastoral and social ministries)
This is a formerly poor neighborhood of Seoul in which a government project displaced most of the poor. The major social problems now stem from the very visible gap between the rich and the poor. This is especially hard on children and youth. Jesuits have responsibility for a ‘mission parish’ belonging to the ministry to the poor of the Seoul Archdiocese, and a neighborhood child center for elementary, middle, and high school students, which is located in the same building where the Jesuit community lives.
The lay collaborators working with the Jesuits, some full-time and many part-time volunteers, have much good experience in social work or scout leadership or counseling or public welfare, or even community organization. The Jesuits and lay collaborators are now undertaking a study and research project to increase marketability and collaboration among their various youth activities. These activities include tutoring, counseling, cultural outings, scout camping, environment awareness, and many more. The Jesuit Research Center for Advocacy and Solidarity is providing technical assistance for the project.

[3] Jeju Island as an island of peace
‘Yiutsari Several Korean Jesuits have placed themselves in the caldron of controversy surrounding the construction of a Korean naval base on Jeju Island, a province of South Korea. The controversial issues include whether the base is necessary, whether the planned base would be harmful to Jeju Island (called ‘an island of peace’ and a tourist destination), whether the planned base will heighten military tension in N.E. Asia, whether the national government should beat down local opposition, and whether the construction will destroy irreplaceable environmental treasure. Several Jesuits have been arrested several times for bodily hindering construction work.
Three Jesuits received the provincial’s permission to leave their apostolates in order to spend full time in supporting the local villagers, peace activists, and the Catholic bishop of Jeju Diocese, Bishop Peter Kang, in their opposition to the project. Villagers overwhelmingly opposed the construction in 2007, but the present government of Korea has consistently pushed its projects unilaterally, employing police coercion. Bishop Kangtook up opposition in 2007 when the villagers opposed it. He said he knew that most people of Jeju opposed the project but were slow to dissent because of a history of being dominated by mainland Korea. Jeju is known for its natural beauty, and the Korean government has promoted it as a tourist destination, using the designation ‘island of peace.’ But the present naval base on the island’s southern coast will needlessly heighten military tension in the East China Sea. The island should rather be maintained as an island of peace.
Our Jesuits have been arrested many times, along with the villagers and peace activists. They have been charged with obstructing the work or damaging property. In most cases they have been detained only within the legal limit for arrest without a warrant. On Mar. 9, however, police arrested Fr. Joseph Kim Chong-uk and received a warrant. He was held in prison until his trial on April 4, when he received a jail sentence of 8 months, suspended for 2 years, and a fine of 100,000 won. He was released, and is now free. He has a bright and smiling appearance. All of our Jesuits involved in the protest have experienced an exhilarating feeling of having suffered with Christ. 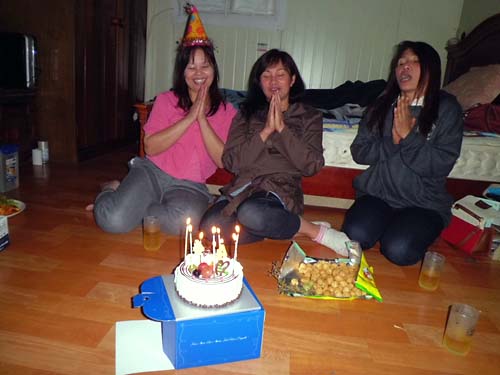