God created this world And then he said “It was very good.”

March 9 a Korean Jesuit, Fr. Kim Chong-uk, was arrested by the police and jailed for a month. His crime was destruction of government property on Jeju Island. He had openly disturbed government plans to construct a naval base there. He broke through a fence around the naval base construction work and entered into the compound illegally. He was released on April 10 and is now protesting again against the government’s destruction of the environment on Jeju Island.
Jeju Island is located at the south of the Korean Peninsula. It is one of the world’s most beautiful islands, known for its pristine nature and for its being a volcanic island. There are about 280,000 inhabitants there, and they are fighting to protect their village from illegal development projects by government authorities. It sounds like a modern-day David and Goliath story.
The proposed naval base is being built at a site where volcanic lava flows enter the sea, a mile-long area known as Gureombi Rocks. This beautiful rocky coast is sacred to local villagers and has been declared a Natural Heritage Site by UNESCO. Natural freshwater springs bubble up through the surface and soft coral reefs lie off the shore. It is also the only home for the endangered Indo-Pacific bottlenose dolphin.
In 2007, the Korean government announced it would construct a naval base at this village, but the project was full of problems and didn’t follow legal procedures. Actually, about 94% of the Gangeong village people opposed the plan for this new naval base. Many environment enthusiasts also opposed the construction of the base because it would destroy the natural environment. Located in the southern most area of Korea, Jeju Island needs no military base for “peace safety plans.” The Government openly said that the new naval base was needed in order to maintain peace in the Asia-Pacific region. Environmentalists, however, insist that if a naval base is constructed on Jeju Island, it will give rise to tensions with China. Actually, China has strongly protested this plan on the grounds that it is creating tensions in the Northeast Asian area.
Frankly speaking, this naval base aims at fulfilling needs of the U.S.A. more than those of Korea. That is the real reason why a naval base is said to be needed there.
According to Jesuit Social Activist Fr. John Dear, “As far as the United States is concerned, the sole purpose of the base is its strategic location near China, Japan, and Taiwan. The United States has asked South Korea to build a major naval base there for its Aegis destroyers — U.S. nuclear-powered aircraft carriers that carry cruise missiles. These missiles, to be kept on U.S. destroyers and submarines at the proposed Jeju Island naval base, could be used someday to destroy Chinese ICBMs.
Fr. Dear continues, “The Korean government’s intention is to build a huge naval base at Gangjeong Village to harbor U.S. Aegis destroyers and nuclear-powered aircraft carriers. It is thus obvious that South Korea’s new base would give the United States the immediate capacity to take military action, with nuclear weapons if necessary, against China. Korea would continue to serve as a pawn for the United States and its imperial strategy to surround China. In exchange, the U.S. would continue to protect Korea.”
Five years ago, the Ordinary of the Jeju Island Diocese, Bishop Kang Woo-il, President of th 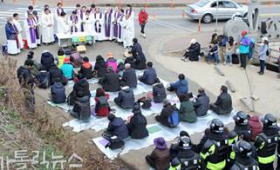 e Korean Bishops’ Conference, issued a call urging all priests and sisters to stand by the people of Gangjeong Village. Thousands of priests and sisters have been involved. One day, 20 sisters were arrested. At another protest, 3400 of the nation’s 4000 priests joined in. Some priests have slept on the rocks of the island’s construction site for months at a time. Others have been arrested for obstructing construction equipment. Others have celebrated Mass on the coast as an act of resistance and a way to continue the centuries-long reverence for the rocky coast as a sacred site. Every day they join the villagers in speaking out, sitting in, fasting, praying and taking nonviolent risks to stop the destruction of this sacred seascape.
Finally, I would like to say something about the Jesuits of the Korea Province. In fact, the Society is one of the strongest of all protesting groups. Some Jesuits are already living in the village on Jeju Island. Some priests and brothers have been arrested several times by the police. Until recently, one priest remained in jail for a month, and one priest was judged guilty and given a 2-year sentence. A brother is waiting for a sentence to be passed by the court at the end of this month. Moreover, Jesuits of the Korea Province, included Fr. Provincial himself, have given them their support. For example, the Jesuit Center holds a weekly Mass for peace in <i>Gangjeong</i>, and many Korean Jesuit scholars have produced reports on these activities and have done research on the issue. Some Jesuits have personally visited Jeju Island. Quoting Fr. John Dear, &ldquo;We have never before been so united as now and have never seen such widespread, steadfast, organized and determined nonviolent resistance.

The involvement of so many priests and sisters in the cause of peace and disarmament is impressive. Never in my life have I witnessed the level of commitment and dedication to a cause that I have seen in Gangjeong Village.”
The Korean Provincial, Fr. Sin Won-sik, said at a homily during Mass, “When we live together with the poor, the suffering and the persecuted, we will be like Jesus Christ. That will fulfill our Jesuit mission in this land.” He encouraged all Jesuits in Korea to participate in this activity.
Recently, Fr. General Nicolas also sent a moving letter to the Korea Province encouraging Jesuit activities with regard to the environment, peace, justice, solidarity and so on. Jesuits have traditionally carried a flame with the

passion to kindle it in other hearts. This is an important reason why such activities must also spread beyond Korea. All these activities point to our Jesuit identity, since our purpose is to “find God in all things.” That is why Fr. General supports from afar the activities of Korean Jesuits on Jeju Island.