WE HAVE A SIMILAR DREAM 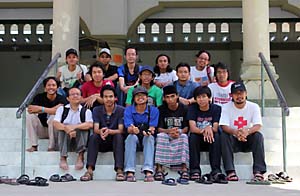 From 17-23 June 2012, 16 Jesuit scholastics and two priests lived in an Islamic boarding school (Pesantren) called “Tebu Ireng,” located in Jombang, East Java. This program was held not only as part of the scholastics’ holiday season, but it was also a result of one of the Jesuit Indonesian Province’s concerns. The Indonesian Province has three main priorities—poverty, environmental damage, and religious radicalism. Therefore, this program became an integral part of our concern. The concern on religious radicalism is also confirmed in documents of the Society of Jesus, particularly of the 35th General Congregation.
We hope that this program will make a significant contribution to our country, which is now threatened by religious radicalism. We also hope that this program will help young Jesuits in training to become imbued with the spirit of religious dialogue. We cannot deny the reality that Indonesia is a Muslim-majority country. Therefore, dialogue with Muslim people is indispensable.
We were accompanied by two Jesuit priests who have deep concern in this field, Frs Heru Prakosa and Greg Soetomo. Fr Heru is ad hoc Coordinator for Muslim-Christian dialogue in JCAP. Fr. Greg Soetomo is coordinator of the Justice and Peace Commission in the Jesuit Indonesian Province.
During the program, we lived together with the Pesantren students, usually called santri. Unfortunately, we were there during a holiday season for the students and there were only a few of them living there. Nevertheless we enjoyed our time living together with them.
One interesting activity we did together was philosophical and theological discussions. We talked about influential 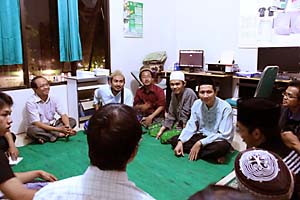 figures from both of our religions. From the Catholic side, we discussed Thomas Aquinas (1225-1274), the great philosopher and theologian. Regarding Islam, we discussed Al-Ghazali (1058-1111), also a great philosopher and theologian. Through the discussions we were able to mutually enrich our knowledge of each other.The most impressive experience we had was meeting with the chief of this Pesantren, Salahuddin Wahid, usually called Gus Sholah. His father was the founder of this Pesantren. Gus Sholah gave us very inspiring thoughts. He said, “We have a similar dream, which is to create prosperity and peace in our country.” He also wanted us to collaborate to make this dream come true. What a beautiful thought! We are united by the same dreams. We had the experience that humanity unites all people, regardless of gender, race, or religion. Indeed, it is our great duty to accomplish this and this can only be realized by struggling together.
Having had such experiences in this program, we are optimistic that there is still a promising hope to build a prosperous and peaceful country, including religious tolerance, since we believe that we are not striving alone. One thing that we learned there was that humanity unites all of us and inspires everybody to spread its benefits to other people around us.