FROM FUKUSHIMA: Work not Accomplished yet

The 3.11 disaster of 2011 is already history but remains unsolved even today. Reconstruction is going on, although the disaster region is still groping toward suitable solutions.
Hamadori is a region of Fukushima along the seaside. And it is at its center that the nuclear accident took place. That is the reason why number 6 national road and the Jobansen railroad remain still closed. Residents living inside the zone considered dangerous that were evacuated cannot yet return. Waste from the vicinity of the nuclear accident with high radioactivity still continues to emit a record of high contamination. All this implies that radioactive materials continue leaking.
I left Tokyo for Fukushima in May 2012. My impression was that although there was dust everywhere children did not wear masks. Of course, neither adult people wore them. Since we were strongly advised to wear them in order to avoid radioactive contamination, my family wore them any time we went out. Honestly speaking summer was very hot. 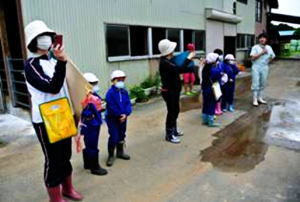 While in Tokyo we calculated many times our move to Fukushima. Our destination was Soma City that is not more than 40km far from the site of the nuclear accident. Iidate village is just next door. People are afraid of low levels of radiation and food and water pollution but especially worry about what is going to happen to the nuclear plants not yet closed. With regard to the Catholic Church I have heard from the bishops that volunteers below 40 years-old should not be sent to work inside Fukushima prefecture. Nevertheless, senior families continue hoping to go back there by all means.

The day my family went back to Fukushima was raining heavily. Next morning we measured the radiation at the bedside. It was 0.34μSv/h. In Tokyo the highest would be 0.07μSv/h. After 10 days living in Fukushima I felt something unusual in my body. My coughing did not stop and for a few days I felt a lot of pain in my chest. The members of my family had similar symptoms. Most probably it was a rough baptism of people that started to live in a region with high levels of radiation.

We spent near two months clearing up our home and fixing our daily affairs, like applying for the day services of our grandmother. While in Tokyo she was receiving day care services twice a week, but in Fukushima we were asked by the day care company to apply for just one-day a week. The reason given was that they were short of personnel. In the disaster area where I live there are urgent demands concerning day-care services. The reason is not that the numbers of elders have increased; rather senior healthy citizens that had to be relocated to safe areas due to the  earthquake disaster have been damaged and are in need of care services. Because of the lack of private  transportation people only know the area around the railroad station and cannot go shopping. And if the workplace is a little far it is difficult to access it. The JR Joban line is still destroyed and thus the only transportation available is a bus or taxis. But, when destroyed houses are in need of repair people do not spend money on riding a bus or taxi. And especially in the country side where private cars are not needed people want ordinary buses.
Since car transportation is impossible the Hello work office found me a job where I could go by foot. It really helped me and I was hired the day after my interview. The place is a construction company and I am able to talk with several people. It is also instructive because aid functionaries come from all over. In there were a science on local comparative government policies I would certainly like to take it. Each local government has its own system. That is why I want to know the system really advanced or those lagging behind, things really useful that could be immediately used.

I continued working during the summer inside a room at 30C degrees. The air conditioning did not work. We kept 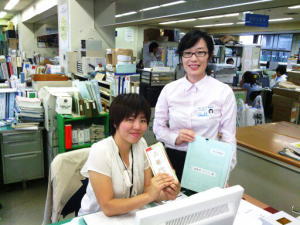 ourselves cool with electric fans and, in an emergency, stepped into the breach to the unit office where air conditioning was running. During summer I put on weight without noticing it. That was because of stress. On the other hand, the ferroconcrete building, as different from home, kept low the level of radiation to 0.06μSv/h.
By the way, in my garden there is a hot spot with 0.07μSv/h. The City Hall department to decontaminate radiation is now very busy in removing radioactive contamination in the mountain areas and they told us that it would take 2 years to start working in the level ground. Since we cannot throw contaminated substances from our homes we keep them in our own ground. Anyway I smiled at the fact that those are resources that cannot be removed either from the town or from Fukushima.

I do not want to blame anybody, but if one is contaminated with radiation by keeping nearby useless substances unable to be cleared out, we must frankly recognize that troublesome things have been produced, thus nuclear plants must immediately be dismantled.
Some of my friends living in Tokyo tell me, “What are you saying? What do you think will happen to our economy if you stop the nuclear plants?” But this is just nonsense. I want to answer back, “People are capital. If you run devices that produce an environment where people cannot survive that will be unprofitable!”

Different Perceptions / Local People’s Consciousness
We can know the consciousness of the locals by observing whether they usually wear masks or not. Are they unaware of the dangers of radioactive contamination or do they pretend not to know it?
With regard to the consciousness of Fukushima residents I asked once some relatives living in Fukushima about the use of masks. Their answer was, “We do not need them anymore. And even if we use them there is no meaning”. They further added that they will be useless even if decontamination work is done next door. There is nothing to be done.
Concerning the citizens of Sendai, I was invited once to attend a Conference about radiation at a Catholic University. During the question period university students asked the speaker, “What can we do for the people of 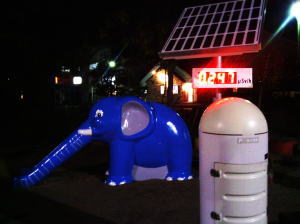 Fukushima?” “You have to think it yourselves” was the speaker’s answer. I felt that they were thinking as outsiders. It is true that the radiation levels in Sendai City are low and by the University is about 0.06μSv/h. Nevertheless the river that flows near Sendai City comes from Fukushima City and ends up in the Pacific Ocean. Do not they know that radioactive substances could remain stopped near the mouth of the river, thus affecting their environment? Much more, Sendai is not so far away from the first nuclear plant of Fukushima. In case a new accident happens nobody knows whether a real danger could occur, but does the university educate the students on that? And even if it does, do the students understand the danger involved? That is what I felt at that time.

Mental care
Mental care is not well-kept and there is fear that the problems will enlarge. About two years have passed since the disaster and because during this period people could not receive appropriate care, there are people whose mental condition has deteriorated. I wish that interested persons could soon enter the disaster areas and conduct clinical as well as research activities. Local governments are unable to do it. Experts doing footwork are not sufficient enough. I want people to understand that, most probably in normal circumstances they are enough to perform their duties but, the disaster areas are in a different context. Maybe local governments think that there is no need for more expert personnel but, in that case I would like them to do their own investigation.

How to Relate to the Supporting Volunteers
Any time we approach funding organizations they oblige us to provide activities reports and even if we do that we are placed in unfair situations like, that there are no detailed explanations of the activities done, and thus they put on our shoulders heavy mental burdens. As I am presently involved in the reconstruction of the lives of the victims in the disaster regions, frankly speaking I cannot afford to become a volunteer. Rather, my opinion is that volunteer activities should be done by people living under normal situations.
I would like to make a request to those involved in assistance action. Please, grasp the local realities. Tourist sightseeing or listening of stories do not provide a real picture to really understand the needs of the disaster areas.
Even if I am just one person resident in a disaster region I have a hearing energy and my strong hope is to participate in the activities of those working to better the directions assistance should take.
Again, if I may give an advice I would dare to say that group involvement is better than a one-person concern. No matter how many people are known by their names, there are many cases when the activities are not clear and, as a result difficult situations easily occur.

The Hearts of People
If I say that people’s hearts easily hollow it may sound like a lament, nevertheless there is nothing more enjoyable than to be able to change from pride to humility. People tend to take advantage of the fact that the human heart is fragile and weak and tumble down. But those longing for a pure heart will certainly find an opportunity, provided that they continue chasing for that. It is important not to give up and earnestly pursue to obtain a pure heart. The journey is long and dangerous and because of the obstacles it is important of taking care of one’s health, and of charging new energy walking alone other companions. Those efforts are to be much appreciated.
Autumn is over. Wind from the North and the sun are outside my window. The wind blows strongly shaking the house. The sparkling sunshine sends its warmth inside my home.
But the North-East region of Japan is cold. Life in temporary housing is also cold.