1)A Glimpse of History
When I worked for the Bishops’ Conference of Indonesia as executive secretary of the Commission for Inter-religious Dialogue (1995-2004), I came to know many problems faced by the victims of conflicts in various parts of the country, where 37 dioceses are located. At that time my eyes were opened wide to the victims, and these victims became the focus of our concern and attention. The Bishops’ Conference then inaugurated a desk, called the Crisis and Reconciliation Service, in their inter-religious office. The main mission of the desk was to be present with the victims so that they could be able to transform themselves, to become survivors. The first step to be taken was to build a network with various non-government organizations concerned with the victims. When a big tsunami hit Indonesia in 2004, we began to collaborate with the local young men and women, especially university students, to help the victims.
Numbers of volunteers came to the Bishops’ Conference office to join the Crisis Center and organize the assistance. Some foreign charity organizations invited us to work together in Aceh. Aceh is predominantly Muslim and, thanks to the students, we were accepted by the victims, especially because our work was humanitarian.
After 2004, due to the influx of foreign charity institutions into Indonesia and the strong urging of Caritas International, the Indonesian Bishops established Caritas Indonesia. Since then, the Bishops have entrusted Caritas Indonesia with the concern for natural disasters.

The volunteers moved on to become a community. Our legal name is “Sahabat Insan”, Friends of Humanity. We decided to continue paying attention to victims. But, since victims of natural disasters are already helped by Caritas Indonesia, we shifted our concern to victims of man-made disasters, migrant workers. Their numbers are huge and the institutions helping them are also many. We did not start from data collection, nor do we work for advocacy, let alone litigation. While keeping up our contact with the victims, we found that there was a further need. There are failed migrant workers who have to return to Indonesia. Their situation is so desperate that they are in dire need of help. Without such help, they will lose their basic human rights. These are those who come back to Indonesia and enter the harbors, but with no friends to accompany them. 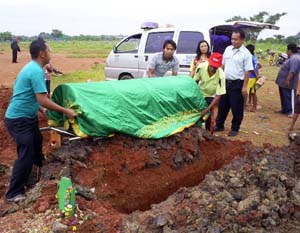 ) Caring for Migrant Workers
The problem is huge and we are tiny. There is an institution called “Peduli Buruh Migrants” (Caring for Migrant Workers), which is led by a woman who was formerly a migrant worker herself. We collaborate with them, helping those who need help. Ms Lily is the one who takes care of our shelter and we assist her especially in financial matters.

“Japan is very satisfied with their work,” he added. “We hope we can strengthen our people-to-people contact through this program.” According to Endang Sulistyaningsih, promotion director of the Manpower Replacement and Protection Agency, Indonesian migrant workers are noted for their work ethics, discipline, and hard work, as well as other traits such as never giving up, saving money, and not being shy to ask questions.
“Do not worry. We will never abandon you. Sometimes we will visit you,” Endang added. Twenty-four-year-old Indonesian migrant worker, Indah Gita Safira, intends to work as a care worker in a nursing home in Japan. She has signed an employment contract to work in Japan for four years. She will receive a monthly salary of about 17,450 yen (?). “I will give my best as a care worker in Japan,” she promised.
But you may have read different reports, like “Indonesia Summons Malaysia Ambassador over Migrant Worker Killings” (Jakarta Globe April 24, 2012). “Relatives of the migrant workers who were shot to death in Malaysia filed complaints with the West Nusa Tenggara Police on Monday. On Tuesday Indonesia summoned the Malaysian Ambassador to explain why three Indonesian migrant workers were shot and killed by Malaysian police and to answer unconfirmed reports that the organs of the deceased were harvested. We want them to come as soon as possible and bring along the clarification,” said Tatang Razak, the Indonesian Foreign Affairs Ministry’s director for the protection of Indonesian citizens overseas. He also said the ministry was coordinating with police in Lombok to conduct autopsies to verify reports that organs had been harvested from the three dead men. The Indonesian government is demanding that Malaysia release the autopsy results and chronology of the workers‘ deaths. Tatang said on Monday that there had been reports from the Malaysian government that the three could have been involved in criminal activity when they were shot by Malaysian authorities. “We will find out whether the workers really committed any crime. If they are innocent, someone must take responsibility,” he said. The foreign affairs minister, Marty Natalegawa, expressed concern about the lack of transparency in determining what had happened to the victims. The government will facilitate another autopsy if that is desired by the victims’ families. “Anything the families desire will be facilitated because this is our problem too,” he said. The bodies of the three, Abdul Kadir Jaelani, 24, Herman, 28, and Mad Noor, 33 were returned earlier this month to their hometowns in East Tombok. They were found dead in Malaysia on March 30, each with gunshot wounds. Suspicions over the motive for their killings arose when two family members of the victims saw the condition of the bodies and said they believed their organs had been harvested.
Rieke Dyah Pitaloka, a lawmaker from the opposition Indonesian Democratic Party of Struggle (PDI-P), said an independent autopsy was needed to determine if the three were victims of organ traffickers. She said the responsibility for the autopsies should not be the burden solely of the migrant worker placement agency, PJTKI. The government needs to be proactive and work together with the Malaysian government. “This is not just the responsibility of PJTKI,” Rieke said on Monday. Tubagus Hasanuddin, a PDI-P lawmaker who is deputy chairman of the House of Representatives Commission I, which oversees foreign affairs, said the deaths could be related to an organ trafficking ring and should be probed further. “This is a gross human rights violation and the government must investigate it,” he said.
Meanwhile, the West Nusa Tenggara Police told the families of the slain workers to wait for a letter from the Indonesian Embassy in Kuala Lumpur providing a detailed chronology of the deaths before filing complaints. “We are not rejecting their complaints, but we advised the families and BP3TKI, the Migrant Worker Placement and Protection Agency to wait for the letter from the Indonesian Embassy in Malaysia first,” said West Nusa Tenggara Police spokesman Lalu Wirajaya. None of the family members witnessed the incident. They only heard about it.
We, Friends of Humanity, do not consider ourselves an institution mainly to help the migrant workers. Our priority is that migrant workers are becoming victims. In other words, “a preferential option for the poor,” the concern of the Catholic Church and the Society of Jesus as well. Recently those in direst need are migrant workers who fail, who are outcast, who come home empty-handed to die. And since we are so small, we have to collaborate with those who share the same concern. 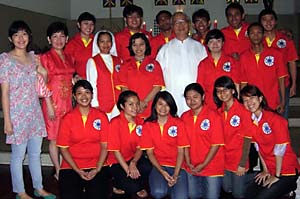